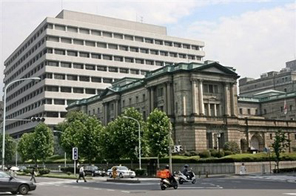 File photo of the Bank of Japan (BOJ) building in Tokyo. Source: AFP

TOKYO: Japan's central bank said Thursday the world's number two economy was showing signs of a recovery, as it maintained its stimulative measures aimed at battling the worst slump in decades.
The Bank of Japan left its key interest rate unchanged at 0.1 percent in a unanimous decision by the eight-member policy board, it said in a statement.
The Bank has been fighting a severe recession with super-low interest rates and a policy of buying up corporate debt to keep credit flowing to firms during the financial crisis.
"Japan's economic conditions are showing signs of recovery," the BoJ statement said. "Public investment is increasing, and exports and production are also increasing."
"On the other hand, business fixed investment is declining mainly reflecting weak corporate profits," it added.
Private consumption "remains generally weak amid the worsening employment and income situation."
The comments were slightly more upbeat than the BoJ's statement last month that economic conditions had "stopped worsening."
Japan's economy returned to positive growth in April-June, limping out of a year-long recession, but exports and factory output remain much lower than before the economic crisis and unemployment is at a post-war high.
Deflation has also deepened with core consumer prices dropping 2.2 percent in July from a year earlier -- the fastest pace on record.
One BoJ board member, Miyako Suda, said earlier this month that the need for the Bank's emergency measures to support cash-strapped companies were decreasing as the global financial crisis abates.
But it is unclear whether the rest of the board shares her views. Suda is considered one of the more hawkish members and was a lone dissenter in January against the programme to buy corporate bonds.
The BoJ said in its statement Thursday that it would "continue to exert its utmost efforts" to return Japan tosustainable growth and price stability.