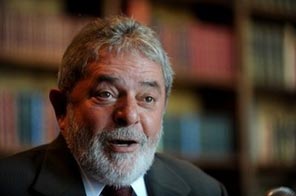 "I'm not afraid of investment lacking because this is the same model for all countries that have oil," he said in an exclusive interview in his official Brasilia residence.

"We know that companies have to invest, pay costs and be profitable. But the state can't turn away from all it has done" to find the oil fields, he said.

Lula on Monday announced an overhaul of the legal framework he wants to see applied to the deep water oil fields discovered over the past two years.

The estimated 12 billion to 50 billion barrels of oil they contain could propel Brazil into the ranks of the top 10 oil-producing nations in the world.

Under the plan that still needs congressional approval, Brazil would not use a concession system applied previously, instead handing state-run oil company Petrobras sole operating rights to the subsalt fields.

Where Petrobras needs to enter into a joint venture with a foreign company to cover the huge cost of recovering the oil, it will still have a mandatory 30 percent leading stake under a production-sharing arrangement.

"It was the right decision to adopt this model," Lula said.

"The concession system, which has existed in Brazil since 1975, is applied when we don't know whether there's oil there.... But when oil is found, there is no more contracting of risk, or of concessions."

The Brazilian president said discussions to formulate the legal proposal for the subsalt fields focused on the need "to guarantee that most of this oil remains here as part of the national wealth for Brazil's 190 million people."

The aim was to use the oil -- which he called "God's bounty" to provide revenues that would give Brazil "a qualitative jump forward" by funding science, industrial and educational development, and fighting poverty.

"I don't know if I will live to see it, but Brazil has to transform itself into a big power in the 21st century. We have everything to make it happen. We are not talking about a little country here," he said.

Lula has already described Monday's unveiling of the new legal model for the oil fields as "a new Independence Day for Brazil."

Big foreign oil companies, though, are still weighing what profits they can extract from Brazil's subsalt reserves under the proposed model.

"We are studying the details of the proposal," Patrick McGinn, head of upstream media relations for the US giant ExxonMobil, told AFP.

"We believe the greatest rewards for the people of Brazil would result from a framework that encourages additional investment and timely resource development, and rewards innovation and the deployment of advanced technologies," he said.

Scott Walker, corporate media advisor for US oil company Chevron, said: "The regulations are a matter for the Brazilian government to decide and it is premature to comment on specific detail."

But, he noted, Brazil had "big" potential for long-term oil production.

"Brazil has been one of the few countries in the region that has the conditions to maintain and grow investments. It is the future for the oil industry," he said.

#Brazil's tight control over oil won't scare investors: Lula
You May Also like: