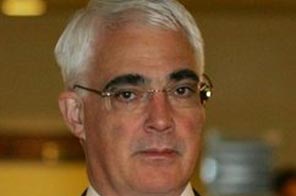 Chancellor of the Exchequer, seen here in 2009, insisted that the government has ruled out copying the United States by proposing a special tax on banks to recover state funds used to bailout lenders during the financial crisis. Source: AFP

LONDON: Britain has ruled out copying the United States by proposing a special tax on banks to recover state funds used to bailout lenders during the financial crisis, the British finance minister insisted on Saturday.
Alistair Darling told The Scotsman newspaper that the government would not be matching a proposal announced by US President Barack Obama on Thursday for a new fee on major banking firms.
"No, we are not. The Americans are doing something different," Darling told the daily, adding that Britain would recover state aid by eventually selling stakes recently built up in rescued British banks.
Obama on Thursday said he wanted to recover "every single dime" taxpayers shelled out to rescue Wall Street from the economic crisis.
His tax plan, if approved by Congress, would raise 90 billion dollars from 50 big financial institutions, including foreign banks operating in the United States, under an effort to recoup money from a massive bailout of the banking sector.
Obama said the move is aimed at preventing Wall Street firms from going back to business as usual and resuming high-risk lending practices and huge bets on mortgages and other instruments he blames for igniting the financial crisis.
Britain has meanwhile taken control of major lenders Royal Bank of Scotland and Lloyds Banking Group following its own multi-billion-pound bailouts of the two groups.

#Britain rules out copying US bank tax plan
You May Also like: