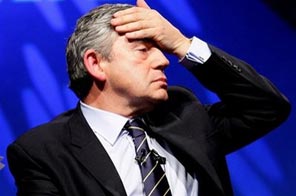 The announcement, which reverses overly optimistic statements about economic growth, sets the stage for a bruising general election battle with the opposition Conservative Party over who can best manage the country's dwindling financial resources.

Brown previously attacked plans set out by the Conservatives to cut public spending in order to lower government debt. He said in June that a looming national election, which Brown must call by June 2010, would be a contest between "Tory (Conservative) cuts versus Labour investment."

"He and his style of politics have been comprehensively defeated," Osborne said.

Support for Brown's Labour Party was at 27 percent, behind the Conservatives on 41 percent.

Populus interviewed 1,504 adults by telephone Sept. 11-13. No margin of error was given, but in samples of a similar size it is plus or minus 3 percentage points.

Many economists fear that the country's debt burden may actually exceed gross domestic product in the next couple of years amid mounting debt interest payments and rising unemployment costs.

Treasury chief Alistair Darling said in his April budget that the figure would likely peak just below 80 percent of GDP in 2013-2014, but his forecasts were due to be revised soon.

"We have a plan to halve the deficit over a four-year period," Darling told BBC radio. "That does not mean you are going into some sort of dark age where the lights go off and nothing happens."

Brown declined to specify in which areas spending cuts would be made, but said plans would be published in the coming months. "Labour will not support cuts in the vital front line services on which people depend," he said, without identifying which programs would be protected.

The Conservatives have pledged not to make cuts to Britain's health and international aid budgets.

#Brown: Britain must cut spending to reduce debts
You May Also like: