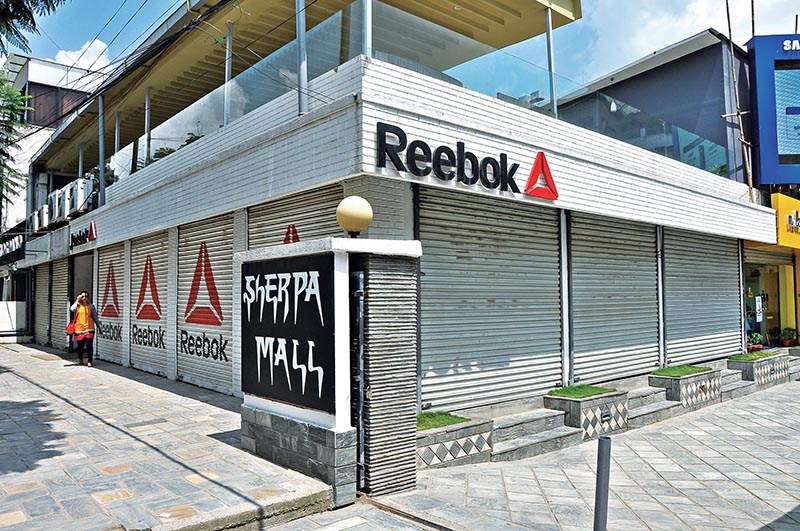 Kathmandu The recent market monitoring campaign launched by Department of Supply Management and Protection of Consumers Interest (DoSMPCI) has taken the capital by storm as many cases of over pricing, exploitation of consumer rights, irregularities in billing and other fraudulent business practices have surfaced while raiding showrooms in  Durbar Marg. Currently, the market is packed with consumers on a purchasing spree for the upcoming festive season. The step by DoSMPCI is likely to ensure that consumers aren’t cheated by business enterprises and fooled with schemes and sales offers. It is important that the DoSMPCI accelerates its market monitoring all over the country and succeeds in bringing business firms that are engaged in malpractices under judicial jurisdiction. However, there are two sides of a coin; in the recent episode one side where unethical business practices were rampant was shown to the public. The other side, wherein business owners suffer at the hands of government’s high import tax (going up to 135 per cent) must also be taken into consideration — if not for anything else then at least for a fair blame game. various showrooms sealed On September 4, Minister for Supplies, Shiva Kumar Mandal led the team with the other officials of DoSMPCI on raids and sealed four ‘brands’ outlets in Durbar Marg. Shops selling brands such as Bently, Nike, and Puma were sealed after the government authorities discovered huge differences in purchasing prices and selling prices of the products. Subodh Retail and Sendly the Leather were sealed after failing to show trade registration documents and purchase and sales bills. DoSMPCI has given Subodh Retail a three-day ultimatum to appear with necessary documents and invoices. Sendly the Leather was given 24 hours to appear before the department with necessary documents. Meanwhile, Avenue Marketing was sealed and given three days to appear before the DoSMPCI with clarification on the huge profit margin enjoyed in the price of Nike shoes and t-shirts. Similarly, Platinum Trade Concern was sealed by the authority after it failed to present the invoice for the last fiscal year and also couldn’t justify the high selling price against the low cost of purchasing. Black Marketing and Some Other Social Offences and Punishment Act of Nepal 1975 states “if person trading any goods prescribed by Government of Nepal has taken profit in excess of 20 per cent normally or sell the goods, by receiving undue profit, taking advantage of the shortage, such a person may be punished with imprisonment for a term not exceeding Five years or with a fine or with both.” However, it appears that trading enterprises have taken profit of more than 100 per cent in some cases. Speaking with THT Perspectives, Laxman Shrestha, Spokesperson for DoSMPCI says, “Many consumers had filed complaints against the showrooms in Durbar Marg, so DoSMPCI raided the brand showrooms and confiscated the invoices and sealed the shops that failed to reveal purchase invoices or found to be selling products with extreme profit margin.” According to him, fraud charges will be filed against shop owners with the District Administration Office (DAO). 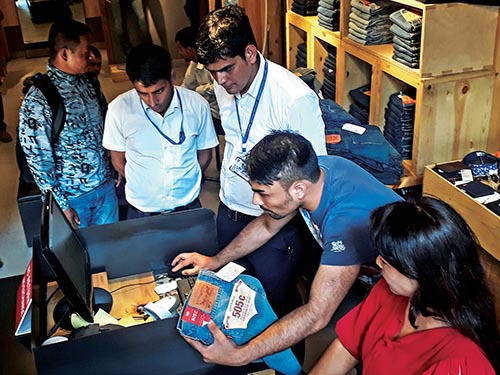 Continuing the market monitoring campaign, officials from DoSMPCI again raided some other brand shops in Durbar Marg on September 6. The team lead by Ram Krishna Shrestha raided Levels Stores which sells Reebok products and found that the Reebok shoes purchased at Rs 7,615 was sold at Rs 16,490. The team confiscated the products and sealed the shop. Likewise the team led by Mohan Kumar Pudasaini raided and sealed the Levi’s showroom after finding that a pair of jeans purchased at Rs 3,570 was sold at 7,399 to consumers. Likewise, the DoSMPCI also sealed Sulux Centre and Watch and See after finding that Watch and See has been selling watches costing Rs 4,500 at Rs 13,000 and Sulux was found guilty of selling a branded watch worth Rs 77,000 at Rs 200,500. Besides these shops, many other shops selling brand names were also inspected by DoSMPCI. Even though it is evident that many brand showrooms sell their product with huge profit margin, the traders find fault in the government’s monitoring policy itself. Stressing that the government’s policy of only allowing 20 per cent profit margin is harsh, Shree Gurung, Planning Head of Durbar Marg Development Board, says, “It is impossible for any business person to sell products with the gross profit of only 20 per cent. It should be net profit of 20 per cent after excluding rent, salary of employees, bank interest and other expenses. Furthermore, DoSMPCI should give us some time to submit our papers and other legal documents before sealing our shops.” He further adds, “The whole monitoring campaign is a part of the government’s populist propaganda and it will damage the image of Durbar Marg. We will shut down every shop in Durbar Marg if the government does not stop this sort of illogical raids and sealing.” However, Shrestha counters the argument and states, “Shops in Durbar Marg cannot be given preferential treatment because they have higher expenses. Law is equal for all and shops in this area will have to adhere to the law. If not, they will be punished.” Under invoicing of imports The practice of creating faulty invoice at custom points is blamed for the huge difference in the purchasing price of a product and its selling value. In Nepal, business persons often import goods from other countries by declaring lower price of the products in order to avoid custom duty. As a result, when the product reaches the market, there is a huge difference in the declared cost price and selling price. The fact that reference price is not allocated for imported shoes and other clothes and the liberty provided to importers for declaring the price of such products on the basis of Custom Act 2007 hampers revenue collection and encourages black marketing. Speaking with THT Perspectives, Ramesh Paudel, a businessman and member of Durbar Marg Development Board shares, “It is the customs officials who take commissions and assist business persons in the under invoicing of imports. Products are originally purchased at higher rate but due to low invoicing it appears that shops are selling products at 100 per cent of profit. So, if the government really wants to curb black marketing, it should start with its customs points.” Seeking anonymity, an official from DoSMPCI says, “Even though DoSMPCI is deputised to monitor black marketing, it is impossible to put an end to illicit business practices. Furthermore, black marketing of consumer products starts at the customs where corruption is rampant. The business community too is backed by political establishments which makes it easier for them to avoid judicial jurisdiction through lobbying and other irregular means. “ 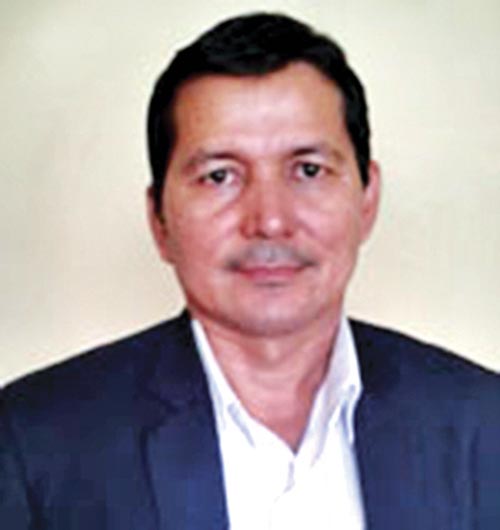 Many consumers had filed complaint against the showrooms in Durbar Marg, so DoSMPCI raided the brand showrooms and confiscated the invoices and sealed the shops that failed to reveal the purchase invoices or found to be selling products with extreme profit margin Laxman Shrestha Spokesperson, DoSMPCI 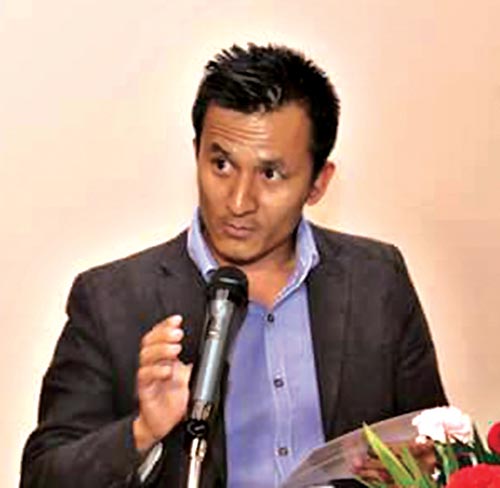 It is impossible for any business person to sell a product with gross profit of only 20 per cent. It should be net profit of 20 per cent after excluding rent, salary of employees, bank interest and other expenses Shree Gurung Durbar Marg Development Board

The government must keep a watchful eye on the custom offices in order to stop the under invoicing of import if it is to curb over pricing. If imports are strictly scrutinised and importers are forced to pay the actual custom duty, then there will no doubt be uniformity in the market in terms of price and quality. Given the lack of such reformation, importers are exploiting the bureaucratic loopholes to their best advantage. Always the consumers It is important to note that it is always the consumers who are at the receiving end of such fraudulent business practices. The fact that consumers are exposed to over  -pricing and also cheated through sale schemes clearly violates consumer rights. Furthermore, it also appears that the level of consumers’ awareness is abysmal and that consumers rarely speak out when they come across malpractices. Speaking with THT Perspectives, Dhurva Lal Tandukar, member of National  Consumers  Forum Nepal says, “Market monitoring should  not be seasonal  and only limited to Kathmandu. It should be conducted nationwide throughout the year and not only the government but the general public should also take ownership in the monitoring process because at the end of the day, it is the consumers who  are deceived.” The absence of consumer court in Nepal is another issue that needs to be addressed. Consumers don’t have a direct channel to file their complaints against illegal business practices and the normal judicial mechanism fails to prioritise cases against the violation of consumer rights. They have to go through DoSMPCI but DoSMPCI is not a judicial body and cannot penalise the traders for illicit acts and have to proceed the case through DAO. Shrestha said, “Consumers can file their complaint with the police or DoSMPCI but if it is a case of black marketing then only DAO has the authority to file a case in the court.”  Therefore, consumers will only have access to immediate justice if they have open access to consumer courts in the country. Additionally, a separate fast track mechanism must be introduced to address the cases of black marketing.
#Durbar Marg #Department Of Supply Management and Protection Of Consumers Interest #DoSMPCI #Minister for Supplies Shiva Kumar Mandal
You May Also like: