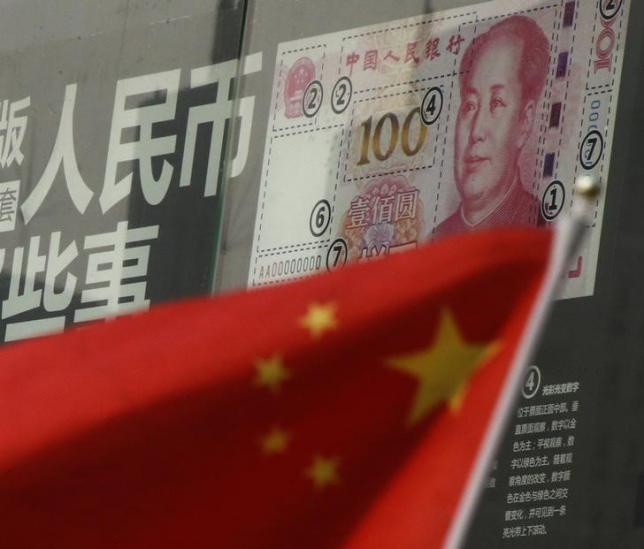 China's national flag is seen in front of a poster explaining the design of new 100 yuan banknote at a branch of a commercial bank at a business district in Beijing, China, January 21, 2016. REUTERS
BEIJING: China's foreign reserves fell for a third straight month in January, as the central bank dumped dollars to defend the yuan and prevent an increase in capital outflows. China's foreign reserves fell $99.5 billion to $3.23 trillion in January, the lowest level since May 2012, central bank data showed, but higher than the median forecast of $3.20 trillion from economists surveyed in a Reuters poll. The size of the drop was second only to the $107.9 billion fall in December, the largest monthly decline on record. The central bank has intensified efforts to prop up the yuan after it staged a surprise devaluation in early August. China's reserves remain the world's largest despite losing around $420 billion in the last six months. In 2015, they fell by $513 billion, the largest annual drop in history. The country's foreign exchange regulators said on February 4 that trade and investment had caused $342.3 billion of the drop in reserves in 2015, while currency and asset price changes caused another $170.3 billion fall. Officials said the fall had been further exacerbated by a rush by local firms to repay foreign debt and increased dollar buying by local residents as the yuan fell. Capital outflows have gained momentum since the yuan's August devaluation, fanned by concerns about China's economic slowdown and expectations of US interest rate rises. "Monetary easing is highly needed amid economic slowdown, but the capital outflow will naturally tighten the monetary policy," Hao Zhou, senior emerging markets economist at Commerzbank in Singapore, said in a note after the data. "In the meantime, to prevent the currency from a fast depreciation, the PBOC (People's Bank of China) will have to sell its FX reserves, which will tighten the liquidity." The PBOC has taken recent steps to curb currency speculation, including setting a limit on yuan-based funds to invest overseas and implementing a reserve requirement ratio on offshore banks' domestic yuan deposits. China also eased capital rules for foreign institutional investors to buy onshore stocks and bonds. Economists expect Beijing to tighten capital controls and close regulatory loopholes to curb the flight of money. China's gold reserves rose to $63.57 billion at the end of January, from $60.19 billion at end-2015, the PBOC said. They stood at 57.18 million fine troy ounces at the end of January, up from 56.66 million fine troy ounces in December. China's International Monetary Fund reserve position was at $3.76 billion at end-January, down from $4.55 billion in December. The central bank held $10.27 billion of IMF Special Drawing Rights, compared with $10.28 billion at end-December.
#China #yuan
You May Also like: