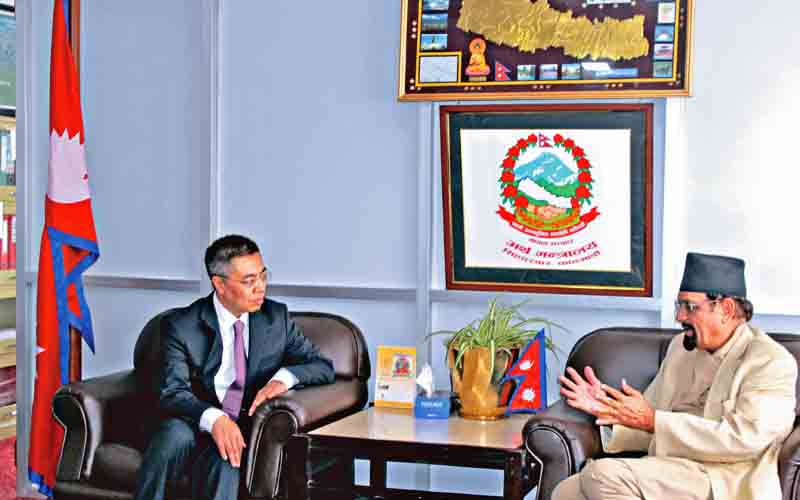 Finance Minister Ram Sharan Mahat having a discussion with Zhang Xiangchen, Deputy International Trade Representative at Ministry of Commerce, China, in Kathmandu, on Thursday. Photo: THT
Kathmandu, July 23 A joint bilateral meeting on ‘Post Disaster Reconstruction Plan’ between Nepal and China has finalised some projects to be carried out with Chinese assistance. These include construction of some schools, rebuilding of a few cultural heritage sites, reconstruction of some sections of the Araniko Highway, rebuilding of damaged structures of the Inland Container Depot at Larcha of Sindhupalchowk district, and integrated settlement development at Timure of Rasuwa district. The meeting was held at the Ministry of Finance today during the visit of Zhang Xiangchen, deputy international trade representative at the Ministry of Commerce, China. Zhang and Finance Secretary Suman Prasad Sharma led the delegations of the respective countries. As the government of China had pledged support worth $489.53 million for Nepal’s reconstruction drive from 2016 to 2018 during the International Conference on Nepal’s Reconstruction on June 25, the northern neighbour has sent its deputy international trade representative to hold talks with Nepal to implement the first phase of China’s grant assistance package plan. Immediately after the meeting of the joint team, Nepal signed for $10 million grant assistance to implement the said projects. Both sides have agreed to give high priority for implementation of post-earthquake rehabilitation and reconstruction projects. The meeting also reviewed China’s emergency relief assistance to Nepal in the immediate aftermath of the devastating earthquake of April 25 and the existing bilateral trade and economic cooperation between the two countries. A letter of exchange for handover of medical equipment to BP Koirala Memorial Cancer Hospital, Bharatpur, Chitwan was also signed. Finance Secretary Sharma and Zhang had signed the agreements on behalf of their respective governments. Moreover, Zhang also met with Finance Minister Ram Sharan Mahat. During the meeting, Minister Mahat stressed on the need for early construction of Pokhara International Airport, which is to be built with China’s support, as the land acquisition process has already been completed. The visiting dignitary informed that China is eager to commence their reconstruction projects in Nepal as per the commitment of the government of China. In the meeting, Mahat assured him that the government will soon set up the Reconstruction Authority, which will give impetus to the reconstruction drive.
#Ministry of Finance #Finance Minister Ram Sharan Mahat #International Conference on Nepal’s Reconstruction #Chinese assistance #Post Disaster Reconstruction Plan #Ministry of Commerce #emergency relief assistance #aftermath of April 25 earthquake #Pokhara International Airport
You May Also like: