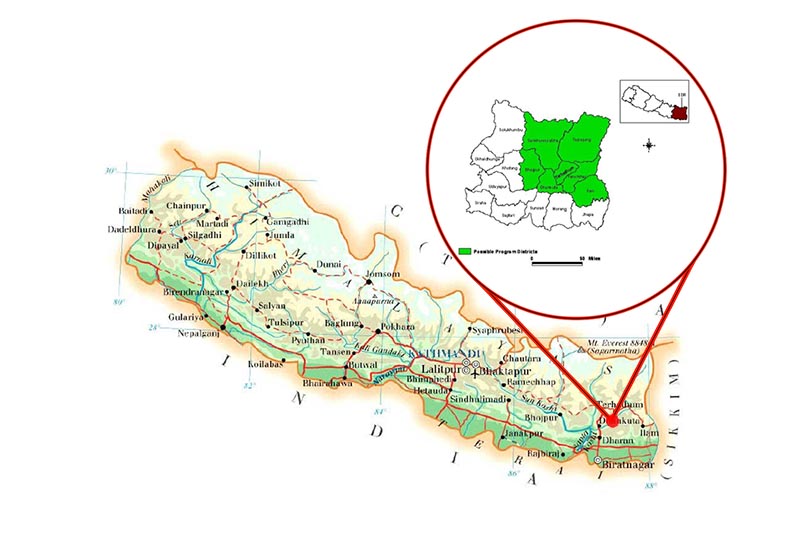 Courtesy: Cricinfo.com via Unnati
PHIDIM: The under-construction physical infrastructures under UNNATI — Inclusive Growth Programme in Nepal — being carried out with the financial assistance from Denmark is likely to remain incomplete. With the construction of infrastructure still incomplete near the extended deadline, the allocated fund of Rs 483,641,000 made by the Danish government for UNNATI project will have to be returned. A total of 13 projects covering rural road networking and improving living standards of people are underway in Phalelung, Phalgunanda, Miklajong, Hilihang and Kummayak rural municipalities, including Phidim Municipality. As the contractor companies have delayed, most of the projects have completed only 30 per cent of work, which was expected to be completed within June-July, District Technician Office, Panchthar's survey report showed. Currently, the widening of roads — Kahule-Ektin-Memeng in Phalelung Rural Municipality, Sumnichok-Ranitar in Phidim Municipality, Saptami-Sarangdanda in Miklajong Rural Municipality, Gumbadanda-Pauwasarata-Imbung-Patle Bhanjyang in Falgunanda Rural Municipality, Uttare-Yasok in Kummayak Rural Municipality — and construction of motorable bridge over Khewatham River are underway. Most of the projects are approaching their extended deadlines, according to Panchthar District Engineer Jayaram Shrestha. The contractor companies, however, have claimed that the projects would be completed in time. Gauraparvati Mritsanjivani JV operator Nirmal Upreti said that the work will be completed in time after making petty tender. Gajurmukhi Construction Company Director Dambar Khadka said that the work has been delayed due to the unavailability of gravels among other materials alongside the lack of support from UNNATI. In the District Coordination Committee meeting held in Panchthar in presence of Chief District Officer (CDO), people's representatives among other political leaders on Saturday, the contractor companies even advised to cancel the contract and take the fund back, while CDO Prakash Chandra Adhikari has advised the contractor companies to submit reliable base committing to execute the work in time. The work progress until now shows that more than Rs 300 million will have to be returned to Denmark if UNNATI project cancels, according to Engineer Shrestha. UNNATI — set to complete in a five-year period — commenced in January 2014. The key priority of the programme is to strengthen market-based growth with a focus on reducing poverty and improving living standards. The core of the programme has focus on the agriculture sector, given its importance as a main contributor to the nation's economy and employment.
#Nepal #Denmark #Unnati #Inclusive Growth Programme
You May Also like: