Dollar under pressure amid Dubai drama 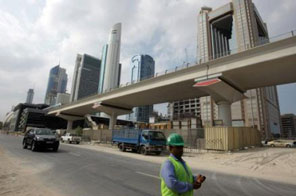 Dubai wants to freeze debt repayments by its mighty Dubai World conglomerate until at least May next year Source: AFP

LONDON: The dollar slid against the euro and lingered near a 14-year trough against the yen, as dealers focused on Dubai, ahead of fresh US economic data, dealers said on Monday.
In late morning trading here, the European single currency rose to 1.5076 dollars from 1.4995 late in New York on Friday.
Against the Japanese currency, the dollar fell to 86.34 yen from 86.52 yen late on Friday, but up from a nadir of 84.82 reached last week.
The United Arab Emirates central bank had announced on Sunday that it was providing additional liquidity to banks, amid worries about the global banking sector's exposure to Dubai. The move was welcomed by the International Monetary Fund.
The Dubai government had rocked markets last Wednesday when it announced that it wanted to freeze debt repayments by its mighty Dubai World conglomerate until at least May next year.
"So what is the impact of the situation in Dubai? Well so far, nobody is really sure," said Phil McHugh, senior dealer at Currencies Direct.
"Given that both Abu Dhabi and the UAE central bank have quickly come forward to assure markets of their support for the beleaguered Emirates state, then the financial impact should be quite minor.
He added that the safe-haven dollar would likely strengthen against rival currencies if the Dubai debt crisis worsens.
"If things do begin to look a little dire, then expect the dollar to come back into focus as risk aversion trades re-emerge," McHugh said.
VTB Capital economist Andrew MacKinnon warned that Dubai could return to haunt global financial markets.
"The threat of wider financial contagion from Dubai has proved limited so far -- but Dubai is a reminder of sovereign credit risk, as well as problems related to commercial real estate loan exposure," MacKinnon said.
"We are not out of the woods yet and last week's events have unsettled investor sentiment."
Meanwhile the euro firmed against the dollar ahead of an interest rate decision by the European Central Bank on Thursday.
The bank is expected to maintain its key lending rate unchanged at 1.0 percent, and it will likely raise its forecast for 2010 growth in the euro-sharing region, dealers said.
In Asia, Bank of Japan Governor Masaaki Shirakawa said the bank was monitoring the impact of the stronger yen on businesses and stood ready to take necessary actions to stabilise the financial markets.
The BoJ "pays due attention to the effects of the recent rapid appreciation of the yen on business sentiment," Shirakawa said in a speech. "Stable moves in the foreign exchange market are desirable."
Money players were bracing themselves for a slew of US economic figures this week that could put fresh pressure on the dollar, dealers said.
Factory and construction spending data will be out on Tuesday, followed by the Beige Book on economic conditions on Wednesday, and the key monthly unemployment report on Friday.
In London on Monday, the euro was changing hands at 1.5039 dollars against 1.4987 dollars late on Friday, at 128.84 yen (129.67), 0.9098 pounds (0.9083) and 1.5078 Swiss francs (1.5077).
The dollar stood at 86.34 yen (86.52) and 1.0026 Swiss francs (1.0060).
The pound was at 1.6529 dollars (1.6500).
On the London Bullion Market, the price of gold eased to 1,165.38 dollars an ounce from 1,166.50 dollars an ounce late on Friday.

#Dollar under pressure amid Dubai drama
You May Also like: