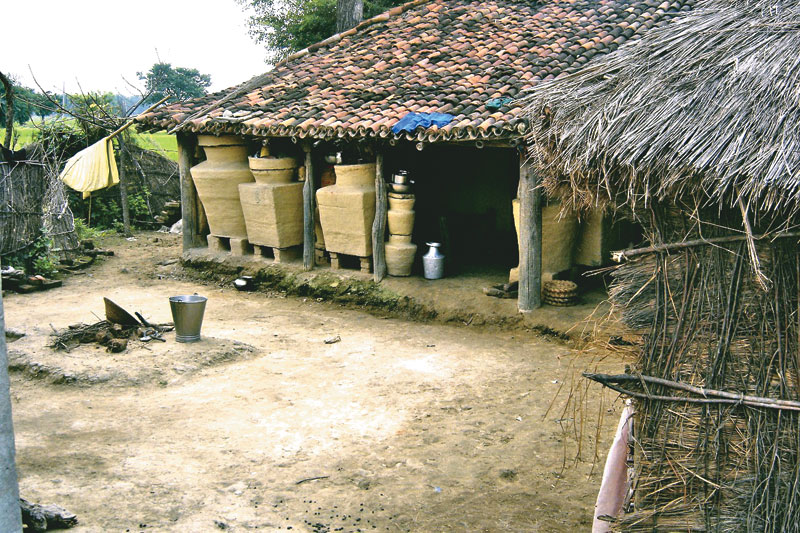 Kathmandu Nepal has amazingly diverse physical settings, from the subtropical jungles at 100 m to the highest mountain in the world. The deepest gorge cuts between the two 8,000 m high mountain massifs of Dhaulagiri and Annapurna. The gorge links an area with over 5,000 millimetres of rain to the south in Lumle to an area with less than 300 millimetres of rain in Mustang to the north. This variation in setting has been the basis for the diversity in vernacular architecture. The buildings range from the flat roofed earthen structures in Mustang, to the stone masonry with slate or shingle roofed structures in the foothills and to the wooden and bamboo houses in the plains. These buildings can further be differentiated by the workmanship and ornamentation derived from the ethnic values and skills of the people. This is the diversity of architecture which expresses the diverse cultural heritage of Nepal. Cultural heritage can be defined as the expressions of values, beliefs and customs through activities and the creation of tangible objects. This creative expression can be manifested in tangible cultural heritage that is immovable landscapes, settlements and monuments as well as movable artefacts and works of art. The tangible expressions that manifest the cultural identity of all ethnic groups and all periods of history must be given equal importance. The prioritisation of any given style or the introduction of a single universal building typology would be understood as tampering with the diversity of cultural expression. It is necessary to understand that this diversity is the identity of the nation. A rather more complicated discussion arises when dealing with intangible cultural heritage which is the expression of the identity of certain communities or groups of people. This would include such critical issues as language, religion and ethnicity. The constitution must guarantee the right of cultural expression for all communities however only if it does not go against human rights and lead to excessive cruelty to humans and animals or irreversible damage to the environment. Beyond the issues of cultural expression, there is the concern of cultural identity. Cultural identity would be defined by the beliefs and values of a given community, which is expressed through ethnicity, religion and language and possibly manifested in tangible forms of heritage. This should not be confused with the political identity of the nation which uses symbols such as the flag and national anthem to express unity. The diversity of cultural expression cannot be sacrificed to create unity through the homogenisation of cultural. There is a saying that extreme circumstances require extreme measures. The extreme measures that are employed often only take into consideration certain physical parameters. Resettlement means moving people from one location to another which is considered safer by experts in a particular field. Providing shelter means four walls and a roof. This, however, does not satisfy the needs of communities that have attained high levels of cultural expression. These considerations raise concerns on the governance of cultural heritage. Reconstruction will require the government to protect the diversity of cultural expression. This means that the continued diversity in vernacular architecture must be ensured. The crux of the matter is that the right to diversity can be provided by the federal government; however, the intricacies of implementation would only be possible by the communities. The continued creation of central authorities to deal with emergency situations takes us further away from decentralisation and giving responsibilities back to the people. The role of these authorities must be coordination, facilitation and support for the communities to rehabilitate and continue living within the context of their own cultural heritage. This provides a clear model to operate during reconstruction, which would seamlessly continue into the new form of governance. The future of the country depends on local governance and cultural diversity and one indicator for this will be continued architectural diversity. (The author is an architect and can be contacted through paharnepal@hotmail.com)
#Architecture #Nepal architecture
You May Also like: