Kathmandu, May 10 A majority of products identified by the Nepal Trade Integration Strategy (NTIS) 2016 as having comparative advantage and which are supposed to boost the country’s exports has witnessed a drop in exports lately. The government had revised the list of high value goods and services with export potential to 12 in May last year, down from 19 products envisioned by NTIS 2010. The NTIS 2016 has identified products, namely carpets, leather products, pashmina, footwear, cardamom, ginger, tea, medicinal herbs and textiles under the priority export items and three services — skilled and unskilled labour, information technology and tourism — as priority sectors for enhancing export. The data maintained by Trade and Export Promotion Centre (TEPC) of the government show export of NTIS products like medicinal herbs, carpets, ginger, cardamom, footwear and pashmina have dropped significantly over the first nine months of 2016-17 compared to the same period of 2015-16. Among others, export of medicinal herbs has slumped by 45 per cent to Rs 580 million between mid-July to mid-April this year against Rs one billion worth of medicinal herbs exported during the same period of 2015-16. Similarly, export of cardamom has plummeted by almost 13 per cent over the review period. As per TEPC, Nepal exported cardamom worth over Rs three billion in first nine months of 2016-17 against Rs 3.5 billion worth of cardamom exported in the same period of the previous year. 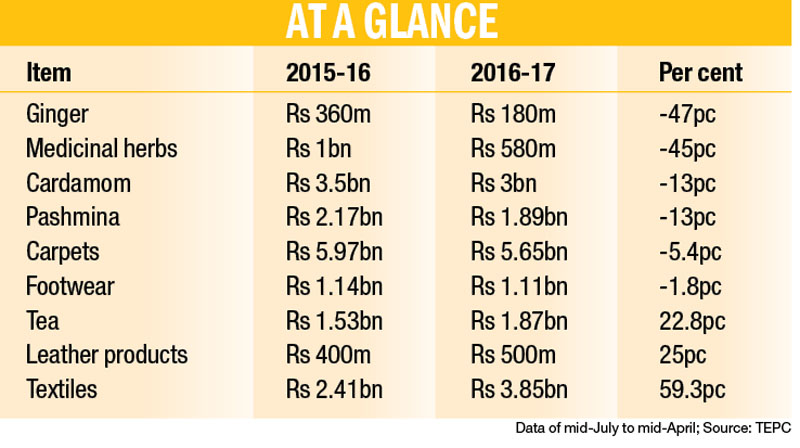 Export of another priority export item of government — ginger — also went down significantly over the period. Nepal exported Rs 180 million worth of ginger until mid-March this fiscal year against Rs 360 million worth of ginger exported in the same period of previous fiscal — a drop of 47 per cent. Export of carpets, one of the major exportable items of Nepal, has also gone down by 5.4 per cent in the first nine months of 2016-17 to Rs 5.65 billion — down from Rs 5.97 billion worth of carpets exported in the same period last year. Likewise, export of footwear and pashmina too has dropped by 1.8 per cent to Rs 1.11 billion and 13 per cent to Rs 1.89 billion respectively, against the export figure of the nine months of 2015-16. Traders have blamed the declining export of priority products to low branding of Nepali products in the international market and high domestic production cost. “Production cost in Nepal is already high due to high tax and high labour cost. Hence, we cannot compete in the international market in terms of price,” Kiran Sakha, president of the Nepal-USA Chamber of Commerce and Industry, said, adding that Nepali products also lack enough promotion in the global market. Sakha also said that export of NTIS products are bound to drop if government does not introduce measures to bring down cost of production in Nepal and support traders to brand Nepali products in the foreign market.