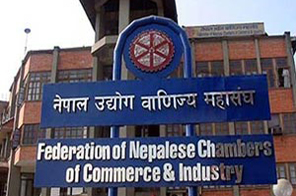 KATHMANDU: Nepali private sector has
declared itself terminally ill; if not administered any treatment and medication soon, it will not be able to stand up again.
In a ceremony to celebrate Industry and Commerce Day, Federation of Nepalese Chambers of Commerce and Industries (FNCCI) president Kush Kumar Joshi acknowledged, “The industries are ill due to forced donations, fear of extortion, unending and violent strikes, lack of sufficient power supply and expensive loans. We believe this illness can be healed only by the process of cooperation and partnership between the stakeholders — industrialists, workers, consumers, political parties and the government.”
“The growth of industry and commerce means the growth of whole nation. Thus, to ingrain this sentiment we have declared ‘Together for Social-Economic Development’ as this year’s slogan,” he said, adding, “We are not asking for special
privileges from the government.” However, he complained, “All
our grievances have been falling on deaf ears since the government
has done nothing so far to address the problems.”
Addressing the trade unions, he said, “Trade and industry’s development is impossible without the support of the workers and vice versa. Thus, we need to work as partners. “
General Federation of Nepalese Trade Unions (GEFONT) senior vice-president Binod Shrestha pointed out that in the last few years there have been more incidents of bandhs and lock-outs carried out by industrialists themselves and by political parties and organisations with political affiliation.
“Thus, it is unjust to dub only trade unions as the villains. We know that without industries, we do not exist. Besides, we wish for guarantee of sustainable peace in our work environment”, he added.
Nepal Trade Union Congress-Independent (NTUC-I) president Laxman Basnet said everyone including the workers wants the overall development of Nepali industries so that employment opportunities can be created and Nepali citizens need not go outside looking for jobs. FNCCI vice-president Krishna Prasad Tamrakar appealed to the trade union leaders to solve the small and local problems at the local level and not to bring such issues to the national level. He urged them to resolve issues through dialogue. Constituent Assembly chairperson Subas Chandra Nembang appreciated the work done by the private sector and FNCCI in spite of unfavourable situation. He assured, “I understand the issues troubling Nepali business sector such as lack of security and load shedding, and we will do everything in our capacity to address these problems.”
April 10 is celebrated as Industry and Commerce Day since 2000 to commemorate the day when FNCCI — the representative organisation of Nepali private sector was registered in 1966 by the government.
Koirala memorial award instituted
KATHMANDU: In the programme, FNCCI president Joshi announced an award that will be granted, starting next year, to the media person who has done commendable job in business and economic journalism. The award will be given in the name of the leader of the national economic liberalization policy —late Girija Prasad Koirala. The award carries a purse of Rs 100,000.

#FNCCIs clarion call for addressing ills
You May Also like: