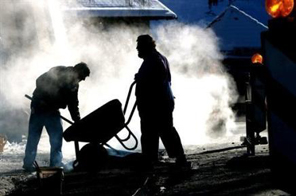 Germany is expected to lead the recovery in the Eurozone Source: AFP

GENEVA: These measures should not be withdrawn too quickly, added Juan Somavia, who is director-general of the International Labour Organisation, warning that such haste could deepen the unemployment crisis.

"Employment and social protection measures taken by G20 governments since the economic crisis began will have created or saved an estimated seven to 11 million jobs in the G20 countries this year," he said.

Citing data from an ILO report to be presented to the G20 during a summit in the United States next week on steps needed to sustain a nascent global recovery, Somavia said if not for these measures, unemployment in G20 countries during the first half of the year would have been between 29 to 43 percent higher.

"Unemployment remains massive today as a result of the crisis. If the special measures taken are unwound or withdrawn too early, the jobs crisis may worsen even further," said Somavia.