Global stocks decline ahead of US Federal Reserve meeting 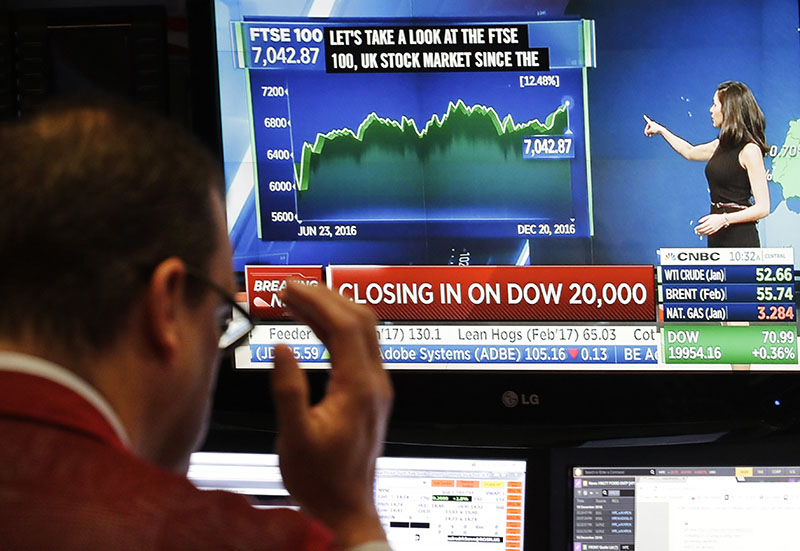 A stock trader follows stock information on electronic screens at the New York Stock Exchange, on Tuesday, December 20, 2016, in New York. Photo: AP
BEIJING: Global stocks declined Wednesday ahead of a meeting of US Federal Reserve policymakers, with markets in Japan and Hong Kong closed for a holiday. KEEPING SCORE: London's FTSE-100 retreated 0.2 percent to 7,237.13 points and France's CAC-40 lost 0.3 percent to 5,387.83. Germany's DAX shed 0.1 percent to 12,490.80. On Tuesday, the CAC-40 added 0.7 percent while the FTSE-100 and the DAX both rose 0.6 percent. On Wall Street, the future for the Standard & Poor's 500 index rose 0.2 percent and that for the Dow Jones industrial average advanced 0.1 percent. ASIA'S DAY: Sydney's S&P-ASX 200 fell 1 percent to 5,892.30 and the Shanghai Composite Index declined 0.3 percent to 3,135.35. India's Sensex was unchanged at 29,909.31. Benchmarks in Singapore and Bangkok advanced while New Zealand, Jakarta and Manila declined. South Korean markets also were closed for a holiday. WALL STREET: US stocks gained but shrinking auto sales offset strong results from industrial companies. Engine maker Cummins sent manufacturers and other industrial companies higher after reporting solid first-quarter earnings. Ford, General Motors and Fiat Chrysler fell after they reported their April sales declined. The S&P rose 0.1 percent to 2,391.17. The Dow gained 0.2 percent to 20,949.89. The Nasdaq composite set another record as it picked up 0.1 percent to 6,095.37. FED WATCH: Fed policymakers meet Wednesday to discuss interest-rate policy. Investors expect them to freeze the benchmark interest rate this month but are looking to a post-meeting statement for signs of when the next increase might come. The CME Group's FedWatch tool says futures markets indicate a 66 percent chance of a hike in June. ANALYST'S TAKE: "Certainly, the poor vehicle sales print can be added to a growing list of below par US data points of late and that will almost certainly be a theme the Federal Reserve will explore," said Chris Weston of IG in a report. "Keep in mind the interest rate markets are pricing a 60 percent chance of a hike from the Fed in June, so this probability will move depending on the tone of the statement." AUTO SLOWDOWN: US auto sales fell 4.7 percent last month, the most pronounced slowdown of the year and a strong indication that 2017 will end seven straight years of growth. Auto executives and analysts, who have been anticipating a slowdown, saw no cause for panic. Many expect sales in the important economic sector to top 17 million for the third straight year, an industry first. Sales have dropped for four straight months, the first time that's happened since the economy ground to a halt in 2009. April sales totaled just over 1.4 million, which translates to an annual sales rate of 16.9 million, far below last year's record of 17.5 million. The April decline brought year-to-date sales down by 2.4 percent from a year ago. CURRENCY: The dollar edged up to 112.20 yen from Tuesday's 111.99 yen. The euro declined to $1.0913 from $1.0929. ENERGY: US benchmark crude gained 48 cents to $48.14 per barrel in electronic trading on the New York Mercantile Exchange. The contract plunged $1.18 on Tuesday to close at $47.66. Brent crude, used to price international oils, rose 61 cents to $51.07 in London. It lost $1.06 the previous session to $50.46.
#Hong Kong #Japan #Global stocks #US Federal Reserve meeting
You May Also like: