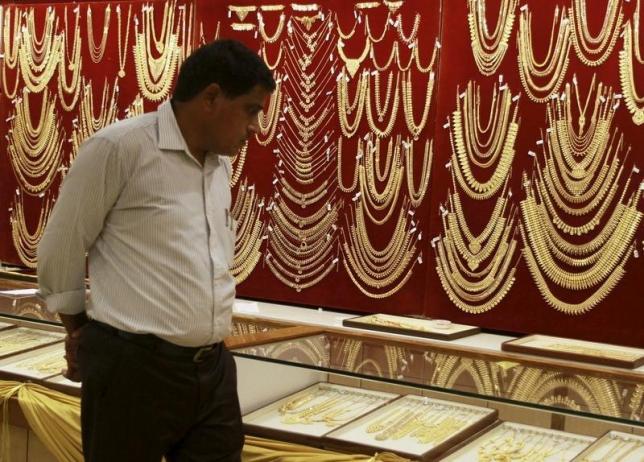 A customer looks at gold ornaments on display inside a jewelry showroom on the occasion of Akshaya Tritiya, a major gold buying festival, in Kochi April 21, 2015. REUTERS
Gold retained sharp overnight gains on Wednesday as disappointing US housing data dented the dollar and supported the Federal Reserve's cautious stance on interest rates. FUNDAMENTALS * Spot gold XAU= was little changed at $1,250.80 an ounce by 0039 GMT, following a 1.5 percent gain on Tuesday. * US housing starts fell more than expected in March and permits for future home construction hit a one-year low, suggesting some cooling in the housing market in line with signs of a sharp slowdown in economic growth in the first quarter. * Tuesday's report from the Commerce Department continued the recent run of weak data that has cast a pall on the economy's prospects. * The dollar fell 0.5 percent against a basket of major currencies on Tuesday, although it ticked higher early on Wednesday. [USD/] * The weak data supported market sentiment that the Fed would find it hard to raise US interest rates this year after hiking the overnight rates in December for the first time in nearly a decade. * While futures markets imply no further hikes until December, Fed projections imply about two more hikes before year end. * Gold is sensitive to rising interest rates, which lift the opportunity cost of holding non-yielding assets. * Holdings in SPDR Gold Trust (GLD), the world's largest gold-backed exchange-traded fund, slid 7.43 tonnes to 805.03 tonnes on Tuesday, the biggest drop in a month. Persistent outflows could undermine the rally in gold prices. * The drop in the dollar also supported other precious metals. Silver XAG= jumped 4.4 percent on Tuesday, in its biggest rise since October, and hit a 10-month high. It retained those gains in early Wednesday trading. * Platinum XPT= was trading near a six-month high of $1,015.70, after climbing nearly 4 percent in the previous session. Palladium XPD= was holding near its highest in a month.
#United States #gold #dollar
You May Also like: