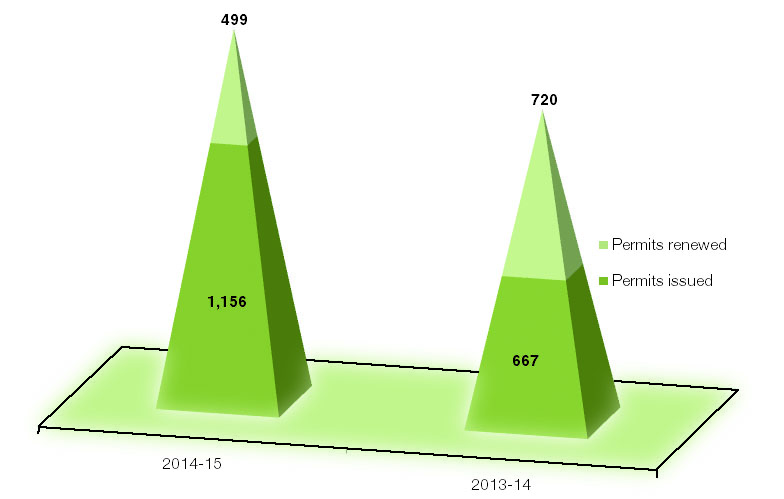 KATHMANDU, July 16 The government is preparing to strictly implement the work permit system for foreigners working in the country from next fiscal year 2015-16. The newly unveiled budget has stated that the permit will be made mandatory for non-Nepali employees to work in Nepal and updated records will be maintained. Even though a huge number of foreign nationals have been working in the country, the government so far does not have official data on such employees. Similarly, issuing work permit for such individuals as per the Labour Act 1992 has also been ineffective because of the considerably low number of expats approaching for the permit and lack of strict rules to penalise the expats not obtaining the permit. Last year, the Department of Labour and Employment (DoLE) had also issued a directive to encourage foreigners working in Nepal to get work permit. However, only a few hundred foreign workers applied for the work permit during the 90-day ultimatum that was provided. There are an estimated 50,000 foreigners, excluding Indians, working in Nepal. Through the budget, the government has also announced of conducting a study on the need of foreign workers. “A study will be carried out within three months regarding the requirement of foreign workforce in the domestic labour market,” as per the budget. Based on the study, the government has a plan to effectively regulate hiring of foreign workers by formulating an appropriate policy. DoLE, for the last five years, has been working on a plan to make all foreign workers obtain work permit and renew it as per the law. Due to the hiring of foreign workers without legal process, the government has also incurred losses amounting to millions of rupees in revenue. A fee of Rs 5,000 has been fixed for Indians, while individuals from other countries are required to pay Rs 10,000 to get the work permit. A foreigner wishing to work in Nepal can get a permit valid for a minimum of five years. As per ‘Guideline for Work Permit Management of Non-Nepalese Employees 2070’ implemented last year, a foreigner who works in Nepal without a permit could be fined Rs 20,000 and even face deportation. Work permit is not required for diplomatic staff, who enjoy diplomatic privileges and immunity. DoLE officials said the number of workers approaching to get the permit is below their expectation but the trend is improving. In the first 11 months of fiscal 2014-15, a total of 1,156 expats obtained work permit from DoLE, against 667 in the same period of previous fiscal year. This is a growth by 73.31 per cent. However, there has been a decline in getting the permit renewed. Work permits of 720 foreign workers were renewed during the review period in 2013-14 but it dropped to 499 in fiscal 2014-15. So far, around 12,000 have obtained permits to work in Nepal. An official at DoLE said more work permits were issued after the April 25 quake this year due to more NGOs and INGOs being active for post-disaster response. NGOs and INGOs fall under social sector, which is one of the bigger segments that hire a huge number of foreigners for paid or voluntary service. Education, construction, aviation, bank, hydropower, foreign diplomatic missions, telecom and hospitality, among others, are the sectors that have employed foreign nationals.