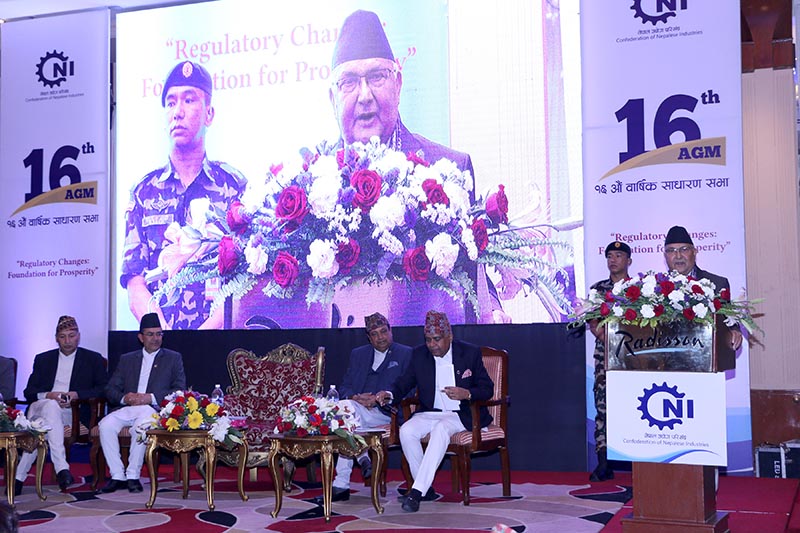 Prime Minister KP Sharma Oli addressing the 16th annual general meeting of the Confederation of Nepalese Industries (CNI) in Kathmandu, on Monday, APril 8, 2019. Photo: RSS
Kathmandu, April 8 Prime Minister KP Sharma Oli today said that the government will whole-heartedly support the business community and address all their ‘logical’ concerns. However, the country’s executive head warned businesses not to take undue advantage of the ‘private sector-friendly nature’ of the government. “The government imposed import restriction on sugar after domestic sugar-related businesses complained about domestic sugar being piled up owing to the increasing flow of cheap imported sugar. However, the market had to witness scarcity of sugar a week after the import restriction was imposed and price of the sweetener rose manifolds. Cheating the government this way is not good,” said Oli, addressing the 16th annual general meeting of the Confederation of Nepalese Industries (CNI) in the Capital. Stating that private sector has a greater role in realising country’s dream of ‘Happy Nepali: Prosperous Nepal’, Oli mentioned that the government is flexible towards private sector’s issues. “But, the private sector should operate businesses based on existing legal provisions,” he added. Similarly, Oli also said that the domestic private sector should support the government to bring in foreign investment as investment from abroad is crucial to fill the country’s financing gap. “However, the government’s attempt to draw foreign investment should not be misinterpreted as the government’s attempt to ignore local investors. We will always put domestic investors in our first priority, while foreign investment is equally important to achieve desirable growth,” the prime minister said. Oli also urged the private sector to inject investments especially in sectors that generate more job opportunities and make the country self-reliant. On the occasion, Finance Minister Yubaraj Khatiwada, said that a cordial relationship between the government and private sector is a prerequisite for prosperity. “The government is amending a number of policies to ensure proper environment for doing business and we urge the private sector to suggest necessary policy changes,” he said, appealing to investors to invest in mega projects. Binod Chaudhary, president emeritus of CNI, said that the development and economic growth issue of Nepal is being discussed globally today. “In such a context, we need to ensure that our business environment is favourable and our infrastructure is competitive to attract foreign investors in the country,” he stated. Meanwhile, CNI President Hari Bhakta Sharma, said the entire private sector is optimistic with the present government and is encouraged with the initiatives taken to reform business policies and the changed perspective towards private sector. “The government has prepared the draft of 15th five-year plan, which has set quite ambitious, yet achievable, targets. The private sector will join hands with the government to achieve all these goals.”
#private sector #Confederation of Nepalese Industries (CNI) #Prime Minister KP Sharma Oli #sugar import #logical concerns
You May Also like: