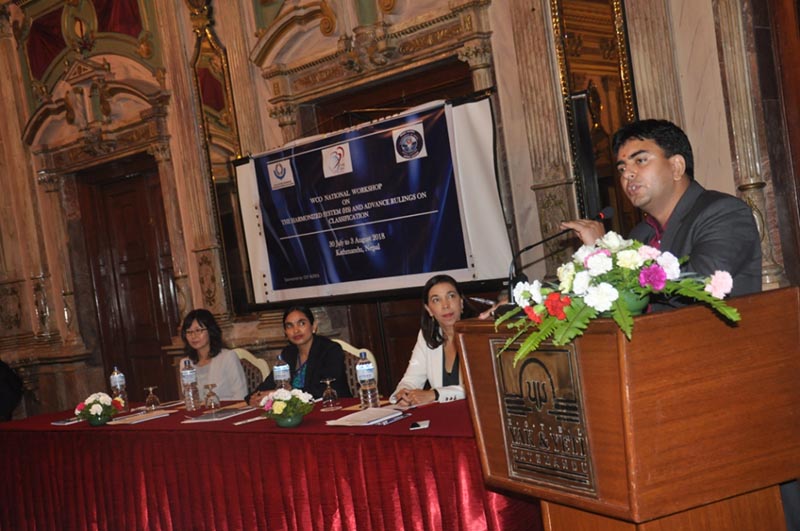 Department of Customs holds WCO National Workshop on the Harmonized System(HS) and Advance Rulings on Classification from July 30 to August 3, 2019. Photo: DoC
Kathmandu, Sept 24 Traders allege that customs officers have been haphazardly classifying and valuating commodities being imported under a single harmonised system code under certain other classifications, adversely affecting their businesses, with imported goods in certain cases being stuck at warehouses of customs offices since long. Just a few weeks back, the customs department circulated a notice to customs offices to classify monitors that require HDMI cables as television sets. So, computer monitors were also classified and valuated as television and those importing computer monitors were made to pay 20 per cent customs duty though the government has waived customs duty on information technology related equipment, such as computers and computer monitors. However, the dispute was later resolved after the Department of Customs instructed customs offices that only LED monitors that have television tuner can be considered as television and the rest as computer monitors. Toyam Raya, director general of DoC, said some traders used to mention wrong HS code in the invoice, prompting DoC to instruct customs offices to strictly check the goods during customs clearance procedure. “Often, traders try to play around the grey area to evade customs duty and this is why we are becoming more cautious. Some importers tried to import television sets by mentioning the HS code for computer monitors in the invoice,” said Raya. Traders allege that customs officials are oriented towards meeting the increased revenue target and the DoC has been making irrational decisions regarding customs valuation. The government has increased the revenue target from customs duty to Rs 176.5 billion this fiscal from Rs 128 billion in the previous fiscal. They point out that the cold room panel, which is normally imported for developing cold storages, used to be imported as puff panel, but is now classified under the building construction and materials segment, forcing traders to pay an additional 15 per cent customs duty this fiscal compared to the previous fiscal. Those importing home appliances are also miffed at the government, as it has raised customs duty on home appliances drastically.
#Customs Department #traders #Department of Customs #customs valuation #Importers #Haphazard customs valuation #warehouses of customs offices
You May Also like: