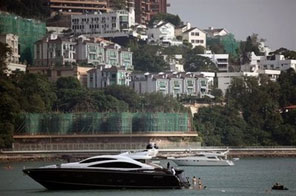 Upmarket apartments and houses are seen rising behind luxury yachts in Hong Kong's Deep Water Bay, on October 18. The government has announced measures aimed at cooling the property market as low interest rates have spurred a dramatic surge in prices and fears of a possible bubble. Source: AFP

HONG KONG: Hong Kong's government has announced measures aimed at cooling the property market as low interest rates have spurred a dramatic surge in prices and fears of a possible bubble.
The Hong Kong Monetary Authority said it had sent a circular to banks on Friday telling them to cut the amount they lend to buyers of luxury homes with immediate effect.
Loans on properties valued at 20 million dollars (2.6 million US) or more would be capped at 60 percent, down from 70 percent. For cheaper properties the maximum loan would remain 70 percent but would be capped at 12 million dollars.
The HKMA, Hong Kong's de facto central bank, also reminded banks to exercise prudence when valuing properties and calculating borrowers' ability to repay loans.
"These are prudential measures designed in the interest of maintaining banking stability, to enhance banks' risk management on mortgage lending to high-end residential properties," HKMA chief executive Norman Chan said in a statement.
Record-low interest rates have helped drive up prices by 41 percent in the luxury property sector while the mass-market segment has risen more than 27 percent, according to property agencies and consultants cited by the South China Morning Post.
The government-owned Hong Kong Mortgage Corporation meanwhile announced that from Saturday it would stop offering insurance to property investors and reduce its maximum mortgage size from eight million to six million and from 20 million to 12 million under its mortgage insurance schemes.
"Given the prevailing market conditions, the changes to the Mortgage Insurance Programme are necessary in order to better manage the increased risks," said HKMC executive director Peter Pang, who is also deputy head of the HKMA.
Increasingly wealthy mainland Chinese investors and low interest rates have stoked demand in a city of tight supply.
Last week Henderson Land Development said it sold a duplex for a world record of 88,000 Hong Kong dollars (11,300 US) per square foot.
That translated into a price tag of 439 million dollars for the luxury property in Hong Kong's Mid-Levels area.
In his annual policy address last week, Hong Kong leader Donald Tsang said record prices achieved recently "have caused concern about the supply of flats, difficulty in purchasing a home, and the possibility of a property bubble".

#Hong Kong tightens lending on luxury homes
You May Also like: