Kathmandu, June 27 Honorary consul generals and consuls of Nepal have urged the government to create a conducive environment to bring more investment into the country. At least 40 honorary consul generals and consuls of Nepal who gathered here for a two-day-long Nepal Promotion Programme organised by the Ministry of Foreign Affairs said they were ready to support the government’s economic development programme by bringing more investment in the coming days.

The programme, which was opened yesterday by Minister of Foreign Affairs Pradeep Gyawali, was also attended by Prime Minister KP Sharma Oli. The prime minister appreciated their contributions made towards the cause of Nepal and Nepali people and urged them to focus their efforts on promoting Nepal as an attractive destination for tourism and foreign investment. 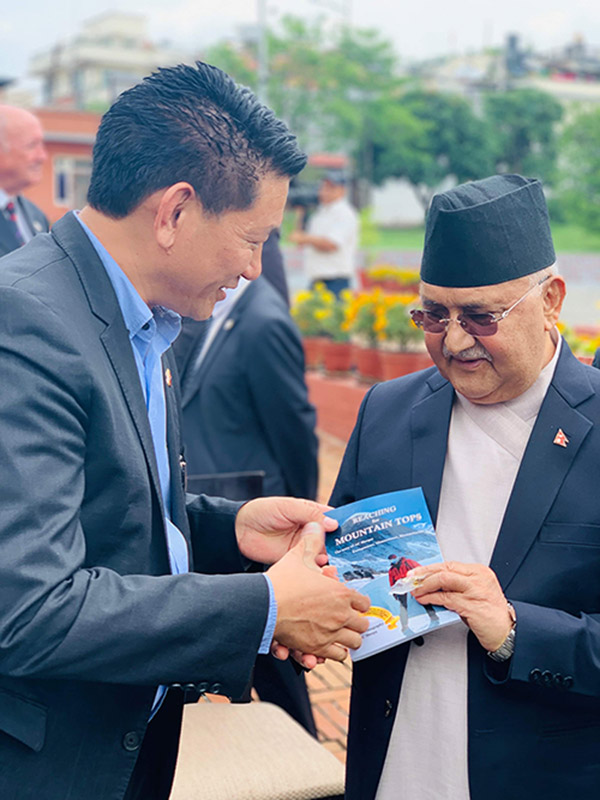 Honorary consul for Washington State AC Sherpa handing over a memoir to Prime Minister KP Sharma Oli. Photo: THT
Minister for Foreign Affairs Gyawali shared with the participants the recent achievements made by Nepal in the areas of political and socio-economic development. He advised the HCG/HCs to further promote Nepal’s economic diplomacy in line with the national aspiration of ‘Prosperous Nepal, Happy Nepali’ and the development priorities of the Nepal government. According to AC Sherpa, honorary consul for Seattle in Washington state of the United States of America, they discussed a wide range of issues, including export opportunities and procedures, Visit Nepal Year 2020 campaign, consular practices of Nepal, tourism policies, infrastructure and potentialities, business opportunities and challenges, among others. The programme was the first-of-its-kind aimed at orienting Nepal’s honorary consuls general/consuls abroad on different aspects of economic diplomacy including trade, investment, tourism and foreign employment. Sherpa said that all agreed to make the VNY 2020 a success. Most of the participants stated that there must be a conducive environment for business investment in Nepal, he added. “We would further focus to excel ourselves and support Nepali communities as much as possible through social services and by promoting tourism, healthcare and education for future generations.” Over the last two days, various presentations were made by experts from both government and private sector on issues such as Nepal’s foreign policy priorities, trade, investment and tourism potential, foreign employment, protection of the interests of Nepali diaspora, and consular and visa services, among others As per Sherpa, honorary consuls always take care of the interest of Nepalis residing abroad for the purpose of business, trade, tourism, education and travel and any other reason and to aid and assist them in all legal, consular and trade-related matters. Sherpa, who had already served as deputy regional coordinator (Americas) for the Non-Resident Nepalis’ International Coordination Council, informed that consul office for Seattle in Washington state will be organising a business collaboration programme in Redmond to explore the benefits of business operations in Nepal for both Nepali and American business interests on July 26. Speakers, including Nepal’s Ambassador to the US Arjun Karki, former US ambassador to Nepal Scott H Delisi, Governor of Washington Jay Inslee, Mayor of City of Redmond John Marchione, Nepal Tourism Board Chief Executive Officer Deepak Raj Joshi and Miss Nepal World Anushka Shrestha, among others, will attend the event which will be participated by more than 200 delegates from the business community, Sherpa said.
#investment #Honorary consul generals #consuls of Nepal
You May Also like: