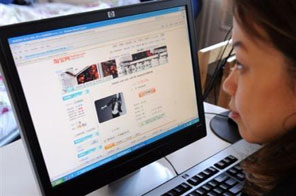 China too has experienced a jump in online retail activity Source: AFP

BEIJING: The Internet global supermarket is booming because people and businesses are looking for bargains and new outlets in bad times, a new report says.
And the this great global shopping mall can only expand rapidly as mobile phone use explodes, the Chinese get involved and advertisers jump in, the OECD forecasts.
But the e-trade revolution is being held back by hidden frontiers, ranging from concerns over privacy of personal information, language problems, delivery costs and taxation and regulation barriers.
As the Christmas spending spree, vital to many retailers and manufacturers around the world, gets under way, the OECD also highlights other worries for consumers.
For example, Santa Claus may never turn up with the goods, or the purchases may be defective, or payment details may be stolen.
These are among the obstacles to increased cross-border trade, paradoxically even within the European Union, which the Organisation for Economic Cooperation and Development lists in a report on a conference under the heading: "Empowering e-consumers."
The report found that the financial crisis had breathed new life into electronic commerce, with sales rising in Europe, the United States and China at a time when the store-based retail sector struggles as consumers' disposable income shrivels.
"The financial and economic crisis appears to be giving a e-commerce a boost as consumers search for ways to reduce expenditures by purchasing items online," the OECD said, adding: "The savings can be substantial."
It cited a study showing that shoppers in Britain, Germany and France can save 17 percent by buying electronics goods, DVDs and clothing on online trading platforms rather than in physical stores.
In the United States on-line sales for 80 retailers rose an average of 11 percent in the first quarter of the year, according to another study.
One site, Craigslist, is forecast to report sales of 100 million dollars this year, a 23 percent increase from 2008. Another platform, Amazon, had net sales of 177 million dollars in the first quarter alone, up 24 percent from the first quarter 2008.
The OECD cites a study by the Forrester research group predicting that western European consumers will buy 123.1 billion euros' worth of goods online by 2014, for an average annual growth rate of 9.6 percent.
China too has experienced a jump in online retail activity. The online auction and retail website of the country's leading e-commerce company, Alibaba Group, reported a 131 percent rise in transaction volume in February compared with a year earlier.
Helping to spur electronic commerce is the growth in mobile phone use. The number of mobile phone subscribers grew at an average rate of 30 percent a year from 1993 to 2007 in the 30 industrialised economies in the OECD.
But the OECD warned that the future of e-commerce is not entirely secure, maintaining that its fate "depends for a large part on the level of confidence that consumers have in on-line shopping."
It noted that half the cross-border complaints and disputes filed with the European Consumer Center Network stemmed from purchases made over the Internet.
"Delivery problems and dissatisfaction with the products purchased were the leading reasons for the complaints, accounting for 75 percent of the total," the OECD said.
Customers voiced dissatisfaction with non-deliveries, misrepresentation by online retail sites and difficulties contacting merchants.
While the Internet may have made it easier to buy products from foreign businesses, consumers have shown themselves to be reluctant to do so, according to the OECD, which cited language barriers, higher shipping costs, regulatory barriers and scams and misleading practices as key constraints.
Last year 33 percent of EU consumers purchased products online but only 7.0 percent bought goods from another country, the report said.
While many countries have e-commerce laws and regulations, such practices risk becoming outdated given the speed at which new products and services are created.
The study found that most countries, apart from the United States, do not have specific regulations to protect the privacy of children.
It said many online retailers ask consumers to confirm their age simply by ticking a box, with no follow-up measures to ensure that the information is accurate.
Another area of growing concern for the sector, according to the OECD, is the use of behavioral techniques that track a consumer's purchasing habits in order to tailor advertising to his or her interest.
But there is little doubt about the economic impact of online advertising. A recent study cited by the OECD found that the contribution to economic activity of online advertising amounts to 300 billion dollars in the United States. The US online advertising sector directly employs more than 1.2 million people.

#Internet supermarket booms in bad times
You May Also like: