Investors should not always pass all risks to government

The government is hosting the second investment summit on March 29-30 to draw the attention of foreign investors towards Nepal. The event is being held at a time when Nepal has not been able to attract even a per cent of its gross domestic product in foreign direct investment. In the first summit held in 2017, foreign investors had expressed commitment to channel $13.5 billion to Nepal. But the country didn’t even receive a small fraction of that amount. Rupak D Sharma and Sujan Dhungana of The Himalayan Times asked Finance Minister Yubaraj Khatiwada why foreign investors should invest in Nepal. Excerpts: 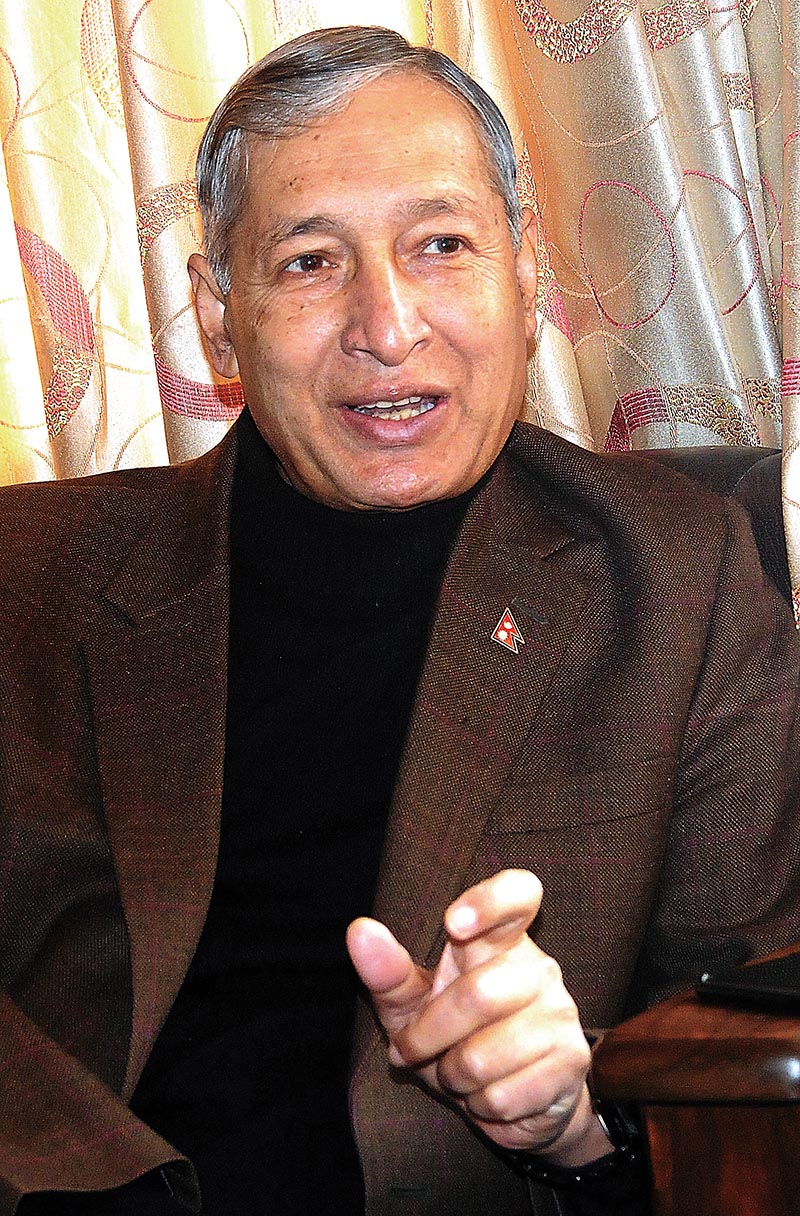 The government is hosting Investment Summit in Kathmandu this month. Why should foreigners invest in Nepal? And what pitch will the government make during the summit?

Nepal has plenty of greenfield projects. It is also located between India and China, two rapidly growing counties with rising middle-class population. Over the years, Nepal has been trying to provide greater access to foreign investors to these markets by improving transport connectivity. Nepal is also home to tall mountains as well as the plains in the Tarai. The mountains, the source of water for thousands of rivers and rivulets, have created investment opportunities in the hydropower sector. If investments are made in this sector thousands of megawatts of electricity can be generated and exported, and thousands of hectares of land can be irrigated.

The plains, on the other hand, have arable land where agro firms can flourish. The biodiversity is another unique aspect of the country. This diversity has endowed us with a wide range of plants, including herbal and medicinal, which can support the agro-industry and the livestock sector. There are also opportunities in organic farming. Our culture is also an asset, which can promote the tourism sector, where the country has comparative advantage.

On top of all these, the government has enacted laws to implement federalism and has devised mechanisms to share rights, revenue and workload among three tiers of government. Above everything else, Nepal now has a stable government which guarantees policy stability.

Who all are taking part in the summit?

So far 600 participants from 40 countries have expressed their interest to participate in the summit.

We have already organised presummit events in New Delhi, Beijing and London to drum up interest in the event. We are planning to host pre-summit event in the UAE as well but the plan has not been finalised yet.

Do you have any idea on investment commitments these investors are likely to make?

We won’t ask investors to make investment commitments as in the previous summit held two years ago. The event is an opportunity for the government to showcase potential areas of investment, projects that we have identified, laws that we have enacted to attract investment, and processes that have been developed to support investors.

The event also provides the government an opportunity to know more about sectors that are of interest to foreign investors because they may not always see investment opportunities in projects or areas identified by us.

Can you name some of the projects that will be showcased during the summit?

We have identified thematic areas such as agro-business, tourism, hydropower, urban transportation, information technology, and solid waste management, among others.

There will be a number of projects under each thematic area. Ministries under the federal government have started sending the list of projects.

We are also collecting a list of projects from provinces and local levels. We have also asked domestic private investors to give us names of projects, which require foreign investment. We will finalise the list within this week.

We reached out to diplomatic missions to invite investors from their countries. We have also asked multilateral lenders, such as the Asian Development Bank and the World Bank, to help us invite foreign investors because they also have private investment arms. We contacted them because they have better understanding on good practices that need to be followed to attract investment.

That issue will be resolved soon. I want to assure that new legal provisions will supersede the old ones, because laws enacted in the past will be duly amended. So, there should be no confusion on this matter.

Nepal generally enacts laws but fails to implement them. It is also said government officials interpret legal provisions to suit their needs. Take for instance, the complaint made by foreign investors of Upper Trishuli-1 Hydropower Project, who have been asked to make equal contribution to hedge foreign exchange risk — a risk that should have been borne by the government. Is this move foreign investor friendly?

Investors should not always think of passing all the risks to the government, while taking home all the profit. This is not fair. There are three main stakeholders in the Upper Trishuli-1 Hydropower Project: The investors who are building the project, state-owned Nepal Electricity Authority (NEA), which is purchasing electricity from the project, and creditors. But in the eyes of the investors the three stakeholders are investors — themselves, NEA and the government. So, the project developers said these three parties should share the foreign exchange risk and make equal contributions to hedge the risk. We told project developers that it was not appropriate to label the government as one of the stakeholders, because NEA is a stateowned entity and represents the government in the project. Having said this, the government is serious about the project, as it will not see slump in power generation even during the dry season. From what I have heard, negotiations with investors of the project have reached the final stage. So, the formula devised to hedge foreign exchange risk in projects funded by foreign investors will be implemented for the first time in the Upper Trishuli-1 Hydropower Project.

I am hopeful the project will achieve financial closure before the Investment Summit.

Shouldn’t a country like Nepal, which does not have sovereign credit rating, be willing to give more incentives to foreign investors to attract foreign investment?

We have initiated the process of getting a sovereign rating. We are currently comparing our indicators with those of South Asian and other countries. Once this work is complete, we will hire an international company to get the rating. As per the results of studies that have been conducted so far, we are not far behind many countries in South Asia.

This means foreign investors will not have to worry about attaching huge risk premium to investment they make here. At present, foreign investors are asking us to get sovereign credit rating so that they can get a glimpse of Nepal’s risk profile. We will frame appropriate policies once we get the credit rating.

While the government is trying to attract investment, many representatives of domestic private sector have complained that you don’t listen to their concerns and that you don’t take their healthy criticism as feedback. Is this true?

I meet representatives of the private sector almost every week. But no one has made such a complaint. In fact, they all heap praise on me for taking initiatives to improve the business climate.

But many have voiced frustration with media. Perhaps, they do not dare to speak out fearing repression.

I consider myself as someone who knows problems of the private sector because I have previously worked with private sector bodies, such as the Federation of Nepalese Chambers of Commerce and Industry, and the Confederation of Nepalese Industries. I have regularly invited representatives of private sector bodies for discussions even after becoming the finance minister. I have also taken their feedback before drafting laws aimed at promoting investment. I have also made market interventions, like in the case of high lending rates, to help enterprises cope with the situation.

Probably, a few individuals are complaining because we have tightened procedures at customs offices to control revenue leakage. But I cannot help them. I want to assure that the government considers the private sector a crucial partner that can help build a prosperous Nepal.

PM KP Sharma Oli has been relentlessly talking about prosperity since taking office. What is the definition of prosperity in government’s words?

Prosperity is about eradicating absolute poverty and illiteracy.

It is also about raising the stock of social capital to ensure harmony in the society. A harmonious society can ensure peace, which, in turn, can help in rapid development of a country. But what is also important is raising people’s income level so that they could lead a decent life. For this, we need to attain higher economic growth rates.

While we are talking about raising people’s income, prices of non-food items like clothes, footwear, house rent, utility services and even transportation are rising quite rapidly, which is eroding the value of money. Shouldn’t that be a concern for the government?

Countries, like India and China, which have registered double-digit growth have seen consumer prices shooting up by 10 per cent or more.

We have not faced that kind of situation. But there is no guarantee inflationary pressure will remain low at a time when we are trying to put the economy on a higher growth trajectory.

This is because high economic growth requires higher investment, which pushes up wages, purchasing power and demand for goods and services. But since the country may not be able to increase production to meet growing demand, prices tend to go up. So, it is difficult to contain price hikes in such a scenario. This is why the government is focusing on raising purchasing power of people so that they can weather moderate price hikes. This means growth rate of people’s income should be higher than inflation.