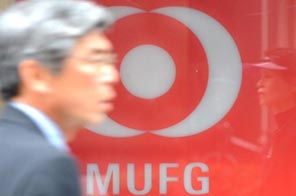 The news came as MUFG reported net profit soared 53.2 percent in the six months to September from a year earlier to 140.95 billion yen (1.6 billion dollars).

"We have come through the financial crisis, compared with the situation a year ago," said MUFG president Nobuo Kuroyanagi, noting that the bank had made progress in cutting costs.

But he said MUFG had decided against upgrading its earlier forecast for a net profit of 300 billion yen for the full financial year to March 2010 as it remained cautious about the business environment.

The bank outlined plans to sell new shares worth up to one trillion yen (11.2 billion dollars), following hot on the heels of other companies including Hitachi and NEC, which are also going in cap-in-hand to the market.

Kuroyanagi said the move reflected MUFG's aim to "establish a base for our future growth."

Based on the bank's current market capitalisation, the sale would be equivalent to 17.5 percent of its outstanding shares.

MUFG said it would revise the terms of an earlier deal to merge its securities operations in Japan with those of Wall Street giant Morgan Stanley.

The two firms announced in March they would fully merge their brokerage firms in Asia's biggest economy, with MUFG taking a 60-percent stake in the new unit and Morgan Stanley holding the remaining 40 percent.

They have agreed to revise the deal, creating another firm that will include Morgan Stanley's non-investment banking operations in Japan. The Wall Street giant will have a 51 percent voting interest in the additional company.

"In reality, I think this is best," said Kuroyanagi. "We would like to meet our clients' needs by making use of our strengths."

The securities tie-up was part of their broader alliance after MUFG threw Morgan Stanley a nine-billion-dollar lifeline last year in the midst of the global financial crisis.

Due to the revision to the terms of the deal, the merger is expected to be delayed by about two months, to May 2010.

Japan's top banks were less affected than many of their Western peers by the financial crisis, seizing the opportunity to buy chunks of troubled US rivals.

But they have not been immune to the market turmoil, largely due to their big stock portfolios.

"Japan's megabanks are showing clear signs of recovery after suffering massive losses and seeing a plunge in stock prices," said Yuri Yoshida, a banking analyst at Standard and Poor's, the credit ratings agency.

"But their business environment is still uncertain. If the Japanese economy suffers double-dip recession, they are likely to return to tough conditions."

Mizuho Financial said last Friday it had returned to the black after a string of heavy losses while Sumitomo Mitsui posted a jump in earnings.