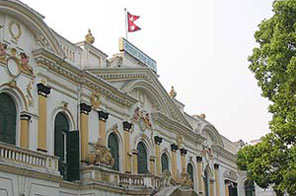 KATHMANDU: Nepal Rastra Bank (NRB) governor Bijay Nath Bhattarai today said that the Nepali banking sector should invest in productive sectors rather than in non-productive sectors as investing in the latter could lead to systemic risks for financial institutions.

investment strategies for sustainable development of the banking sector.”

“After attaining the membership of World Trade Organization (WTO), the Nepali financial sector should work hard to compete with foreign banks and maintain standards in accordance to it,” said Bhattarai adding that NRB is ready to facilitate innovative concepts of the banking sector.

He added that in a country like Nepal where resources are very limited the service sector has to be stronger. At the same time, he said that all sectors should work together and the social dialogue conducted today would change the image of trade unions for the positive.

“It is thought that trade unions are set up to create difficulties in the management of any organization. But, if there is constant dialogue between the management and the

trade union members then the problems of this sector could be identified for sustainable development of the banking sector,” said Finance Ministry secretary Rameshwor Khanal. He added that workshops like this would be beneficial in highlighting the positive impact of trade union movements in future as well.

Khanal added that banking sector should invest to develop the entrepreneurs rather than promoting certain non-productive sectors.

He said that the real estate bubble could burst at any moment as Nepal will not be left untouched by the global recession and the country’s financial sectors have to be prepared before it’s too late. “Trade unions are the sectors that can give response to the financial crisis,” said general secretary of UNI NLC Shankar Lamichhane adding that the implementation of the policy was as important as the indications of the crisis.

SASK regional coordinator Dr Sharan KC said that the financial institutions of Nepal should come up with different partnership strategies.

He also promised to facilitate between Finland and the trade unions of Nepal if necessary in future. Nepal Trade Union Congress (NTUC) president Laxman Basnet said that financial development would be possible only when there is political stability.

He urged the financial sector to develop rural banking for the overall development of the banking sector.

#NRB guv calls for productive investment
You May Also like: