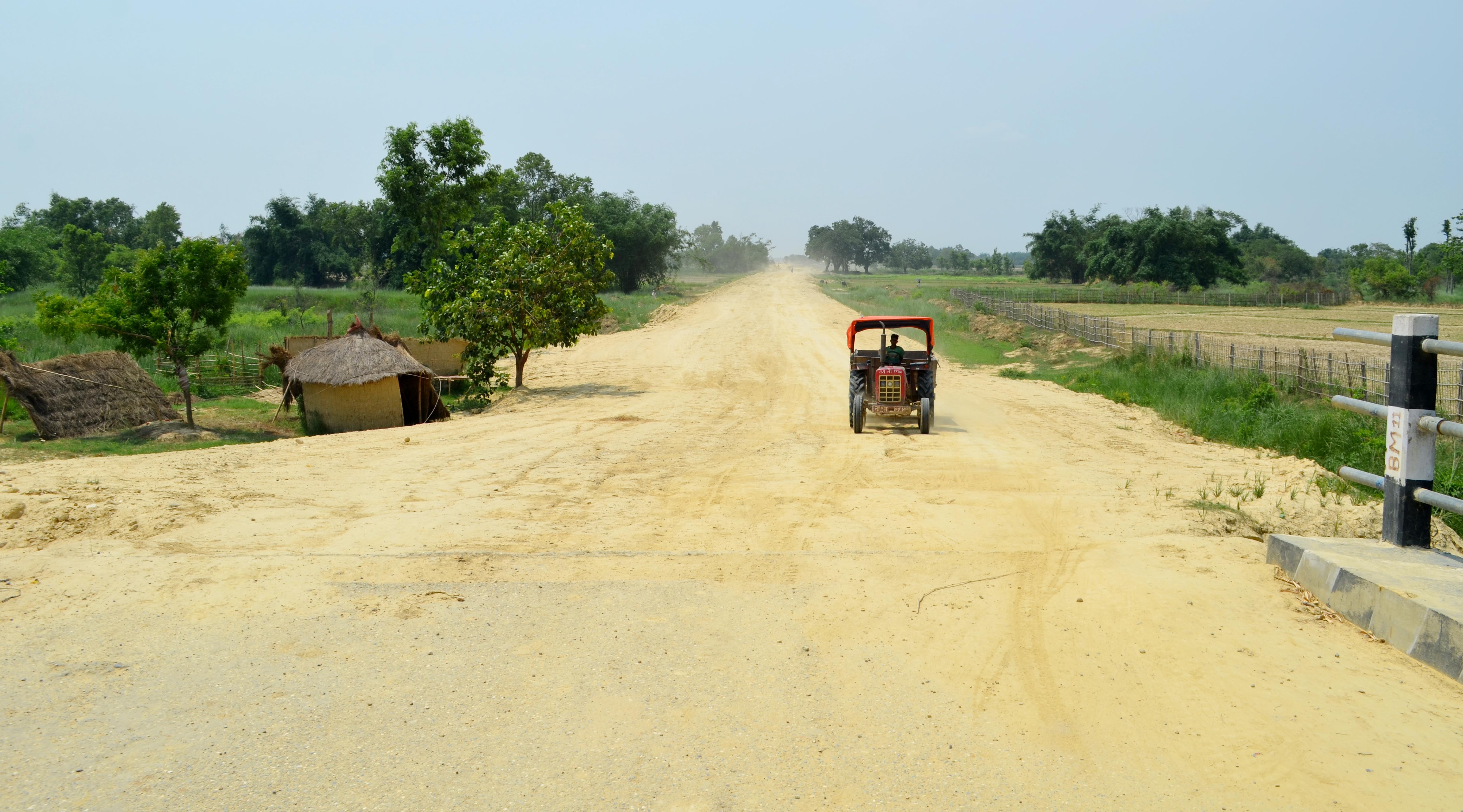 A tractor moves in a rural road section of the under construction Postal Highway which connects 20 districts in Terai belt. Photo: Ram Sarraf/Birgunj
Kathmandu, December 30 Prime Minister KP Sharma Oli has directed the Ministry of Physical Infrastructure and Transport (MoPIT) to complete three national pride projects under the ministry within four years. PM Oli has directed MoPIT to complete the 1,776-kilometre long Pushpalal Mid-Hill Highway, 1,792.42-km long Postal Highway and 1,200-km long Madan Bhandari Highway within four years at any cost. Minister for Physical Infrastructure and Transport Raghubir Mahaseth, informed that PM Oli while speaking during the first quarter review meeting of the ministry today asked the ministry to complete the aforementioned highway projects within the government’s tenure. As per MoPIT, it has been able to complete construction of 86 km of dirt (mud) roads, 162 km of gravelled roads and 99 km roads have been blacktopped. According to Mahaseth, the ministry has completed construction of 25 bridges. At present, the Department of Roads (DoR) has completed construction of 30 km gravelled roads and 14 bridges along Pushpalal Mid-Hill Highway. Fourteen kilometres of roads have also been blacktopped along this highway. Meanwhile, DoR has completed construction of 20 km of gravelled roads and 75 bridges along the Postal Highway. Similarly, it has completed blacktopping 32 km of roads and 84 bridges are under construction along this highway. Likewise, DoR has completed construction of 69 km of gravelled roads and 85 km of dirt roads along the Madan Bhandari Highway. Moreover, the Dharan-Chatara section of this highway is being blacktopped at present. As per Minister Mahaseth, the 112-km long Narayanghat-Butwal road section will be developed into a four-lane fast track project. The tender for this project has already been finalised and construction works will start soon, he said. The project is being funded by the Asian Development Bank. Moreover, the process to select the contractor for the much-hyped 2.45-km long Thankot-Naubise tunnel has already started and will soon be finalised. As per the first quarter review, 94.8 per cent progress has been achieved in 23 projects, which have been termed ‘excellent’. Likewise, seven projects have achieved 64.11 per cent work progress and have been termed ‘good’. Similarly, five projects have completed 41.57 per cent of works and have been categorised as ‘unsatisfactory’ and another 47 projects for which works have not yet started have been classified as ‘worst’ projects. Meanwhile, MoPIT has said that the Department of Railways has conducted the detailed project report (DPR) of the 638-km long Kakarbhitta-Bardibas-Simara-Tamsariya-Butwal section of the electrified railway project and it will be finalised soon. Likewise, 95 per cent works regarding DPR of the 409-km long Butwal-Gaddachauki section of railway project have been completed.
#Ministry of Physical Infrastructure and Transport (MoPIT) #National pride projects #Prime Minister KP Sharma Oli #Highways
You May Also like: