As the budget for next fiscal year is scheduled to be announced in the next couple of days, stock investors have resorted to a wait-and-watch mode. Consequently, the Nepal Stock Exchange (Nepse) index inched up by a marginal 4.47 points or 0.48 per cent week-on-week to rest at 943.43 points, from July 5 to 9.

“Profit-booking by institutional investors in the past two weeks weighed on the stock market, but did not drag down the benchmark index too much,” explained Raj Kumar Timilsina, a stock market analyst. “Meanwhile, other investors are waiting to see what the budget will hold.”

He further said that following the budget announcement, the market will likely show positive growth.

The benchmark index that had opened at 938.96 points on Sunday had dipped by 0.94 point by the day’s closing. It shed another 1.26 points on Monday. Nepse index was northbound for the rest of the trading week, adding 4.6 points, 1.8 points and 0.27 point on Tuesday, Wednesday and Thursday, respectively. 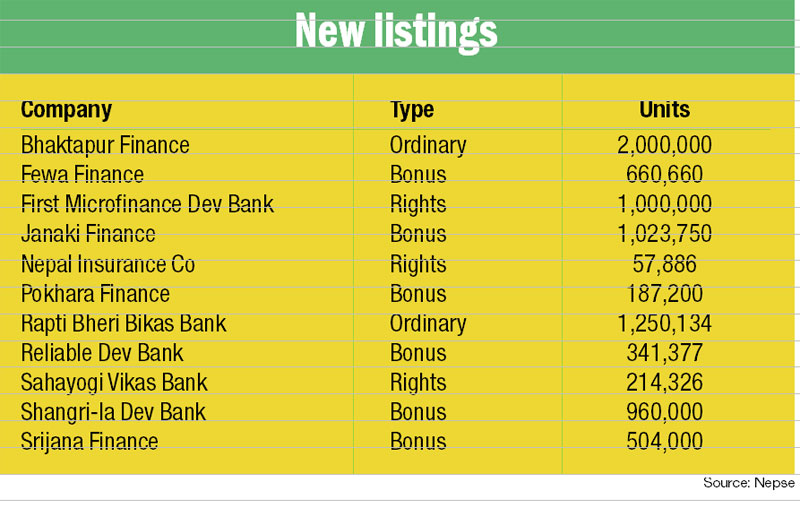 In total, 3.64 million units of shares of 170 companies worth Rs 1.28 billion were traded in the country’s only secondary market through 7,479 transactions during the week. The traded amount was 19.41 per cent less compared to the preceding week when 9,469 transactions had been undertaken of 3.11 million scrips of 166 listed firms that amounted to Rs 1.59 billion.

Others subgroup was the only subgroup to remain constant week-on-week at 728.4 points. Banking, manufacturing, hotels and development banks recorded gains, and the rest of the subgroups witnessed losses.

Almost neck-and-neck with manufacturing sub-index in terms of gain was hydropower, which rose by 15.28 points to 2,107.77 points. Chilime’s stock value went up by Rs 14 compared to the previous week’s close of Rs 1,525 and Sanima Mai’s was up nine rupees to Rs 699, among others.

On the flip side, insurance subgroup — after leading the pack of gainers in the past few weeks — claimed the top spot among the losers this time around. The sub-index slumped by 27.53 points to 4,133.33 points. National Life Insurance’s stock price plunged by Rs 34 to Rs 1,820 and Life Insurance Co Nepal’s by Rs 42 to Rs 2,780. 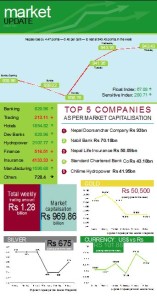 Similar to the previous week’s slip of 3.8 points, trading subgroup shed another 3.63 points to land at 213.11 points in the review period, weighed down by Bishal Bazaar Co’s share value dropping to Rs 2,192 from previous close of Rs 2,235.

Nabil Bank (Promoter Share) was the forerunner in terms of turnover with Rs 125.79 million. Everest Bank with Rs 55.18 million, Prabhu Bank with Rs 51.03 million, Chilime Hydropower with Rs 50.88 million and Machhapuchchhre Bank with Rs 49.33 million rounded up the top five spots in this category.

Prabhu Bank took the lead in terms of transactions, with 359 deals. Meanwhile, Siddhartha Investment Growth Scheme-I secured top spot with regards to number of shares traded with 775,000 of its scrips changing hands.