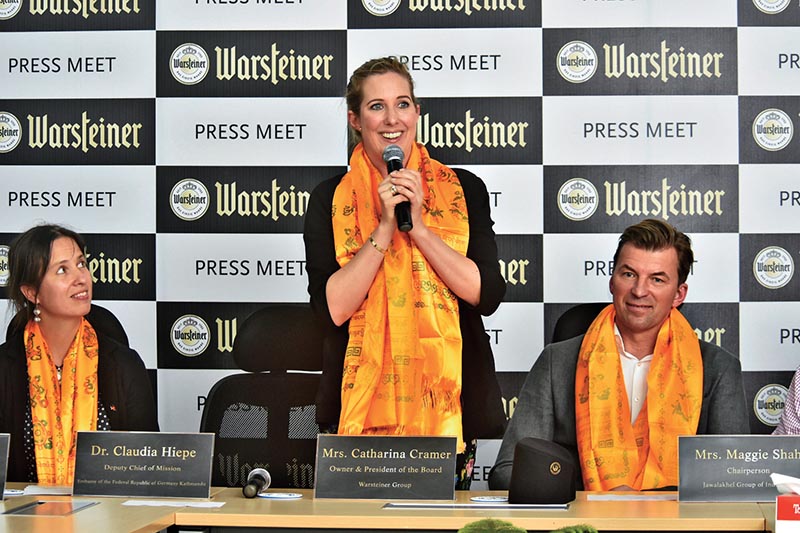 Catharina Cramer, Owner and president of board of Warsteiner Group, addressing the launch ceremony of Warsteiner Beer, in Hakui, Nawalparasi, on Wednesday. Photo: Naresh Shrestha/ THT

Raj Brewery, a subsidiary of the Jawalakhel Group of Industries (JGI), has started commercial production of Warsteiner - a premium German beer - in the country from today.

Amid a special function today, the company inaugurated its state-of-the-art beer production plant located in Hakui of Nawalparasi district and launched the German premium beer officially in Nepal at Rs 295 per bottle.

The company's beer production unit was inaugurated by Catharina Cramer, the owner and president of the board of Warsteiner Group, in presence of senior officials of JGI and delegates from Germany.

Inaugurating the production plant of Warsteiner in Nepal, Cramer expressed her delight in entering Nepal's beer market. “Warsteiner beer will not only focus on enhancing its market in Nepal, but will try to win hearts of all beer lovers in the country,” said Cramer.

Similarly, he also informed that Warsteiner beer production follows the German government's ‘purity law' that clearly mentions the use of water, malt, hops and yeasts as the only brewing materials in beer production. In a bid to maintain commonality in taste and quality, Wiel informed that every ingredient used in production of Warsteiner in Nepal, except water, will be imported directly from Germany.

Addressing the event, Maggie Shah, chairperson of JGI, said that Warsteiner will help to enhance beer drinking culture in Nepal.

Likewise, Claudia Hiepe, deputy chief of mission at the Embassy of Germany in Kathmandu, said that production of Warsteiner beer from a high-tech production unit in Nepal proves the increasing interest of German investors to come to Nepal.

“Production of a German product in Nepal itself will be crucial to enhance the economic relationship between the two nations,” said Hiepe.