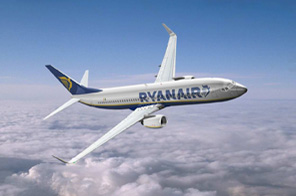 LONDON: Europe's leading budget airline Ryanair said Tuesday it was freezing the expansion of bases in Britain in protest at government tax measures and high charges levied by airport operator BAA.
Ryanair "will freeze growth at its nine UK bases with immediate effect," it said in a statement, citing a "tourist tax" of 10 pounds (11.6 euros, 16.5 dollars) per flight on air passengers and what it called the "monopoly" of BAA.
These "have caused the loss of over 4.5 million passengers at the BAA UK airports in the first five months of the year," the Irish airline said.
"While the UK keeps taxing tourists Ryanair will switch its growth to other EU countries where low cost airports are growing and where governments are welcoming tourists not taxing them," Ryanair boss Michael O'Leary said.
"The government's 10 pound tourist tax is making the UK an uncompetitive destination and they must scrap this tax now to prevent a further collapse of UK passenger, tourism and job numbers," he said in the statement.
Ryanair last week said it would cut 650 jobs in Ireland, blaming the move on similar tax hikes amid a deep recession in the eurozone member nation.
Earlier this month, Ryanair posted an annual net loss of 169 million euros which it blamed on high fuel costs and a large writedown on its stake in Irish flag carrier Aer Lingus.
The loss, suffered in the 12 months to March, compared with net profit of 391 million euros in the group's previous financial year.

#Ryanair retaliates against British tax
You May Also like: