School reconstruction yet to gather pace 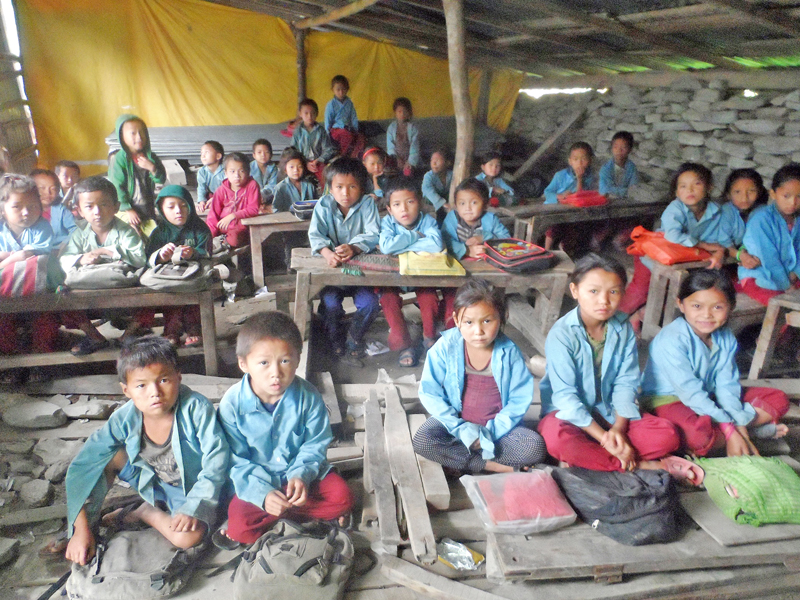 Local kids are compelled to sit on the floor in a makeshift classroom in Manpu-9 of Gorkha district, on Monday, August 15. 2016. Delay in reconstruction of the school buildings damaged by last year's devastating earthquake had added misery to the students. Photo: RSS
Kathmandu, October 15 Of the nearly 8,000 schools that were ravaged by the devastating earthquakes of last year, only 100 schools have been reconstructed in the period of over 18 months. This is because the National Reconstruction Authority (NRA) is still to approve the ‘Schools Reconstruction Guideline’ that was submitted by the Central Level Project Implementation Unit (CLPIU) under the Ministry of Education (MoEd). MoEd, in the proposed guideline submitted around a month ago, has included the provision to release funds to the school management committees based on the running bills after 25 per cent of the estimated cost is released as mobilisation fund when the school reconstruction begins. CLPIU has been working with school management committees for the reconstruction of the schools. As per the proposed guideline, one school can receive up to Rs 20 million from the government as against the existing provision of providing up to Rs six million as grant amount for the reconstruction of schools, according to Ima Narayan Shrestha, project director of CLPIU. The guideline will come into force after the NRA executive committee led by CEO Sushil Gyewali approves it. While reconstruction of only 100 schools has been completed till date, 118 schools are in various stages of being rebuilt — drawing/design, bidding and contract award. According to the CLPIU under the MoEd, a total of 7,923 schools need to be reconstructed in the 31 quake-affected districts. Shrestha said that the severely damaged schools with greater enrolment numbers in the 14 most affected districts will get top priority during the reconstruction process. Likewise, national and international non-governmental organisations can also rebuild the schools in the given areas based on a tripartite agreement between NRA, CLPIU and the concerned NGOs/INGOs. The government will rebuild primary and lower secondary level schools by mobilising its own resources and utilise development partners’ assistance for high schools. Currently, Asian Development Bank (ADB) and Japan International Cooperation Agency have pledged to provide assistance of around Rs 8.5 billion and Rs 11.5 billion, respectively, for reconstruction of schools damaged in the earthquakes. Similarly, the governments of India and China have also pledged to rebuild 70 and 13 schools, respectively. In addition, 14 model schools — one each in the 14 severely affected districts — will be rebuilt under a grant assistance worth around Rs 850 million from Japan Fund for Poverty Reduction (JFPR), which is administered by the ADB. The CLPIU estimates it will cost Rs 67 billion just to reconstruct the damaged classrooms of 7,923 schools. Post Disaster Recovery Framework (PRDF) — the five-year reconstruction plan of NRA — has estimated that Rs 167 billion would be required for the reconstruction of schools equipped with basic facilities like libraries, drinking water facilities, toilets, drainage and sanitation and playgrounds, among others. The government has aimed to reconstruct all the schools within the next three years. It has, however, allocated only Rs five billion for the reconstruction of schools in this fiscal 2016-17. The government expects to mobilise an additional Rs 15 billion from development partners and NGOs/INGOs.