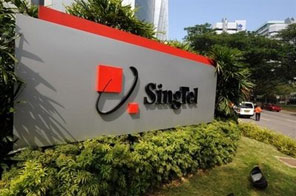 Improved revenues from its domestic market in Singapore as well as from wholly owned Australian unit Optus were also factors behind the surge in net profit for the three months ended September, SingTel said.

A Dow Jones Newswires poll of analysts had forecast an average net profit of 969.9 million dollars.

"We had another quarter of double-digit growth in the group's underlying net profit and this reflects the continued strength of the group to innovate with differentiated products and services and our agility in responding to challenging market conditions," said chief executive Chua Sock Koong.

Revenues during the September quarter grew 5.4 percent on the year to 4.1 billion dollars, SingTel said.

Pre-tax earnings from its stable of regional mobile associates increased 32 percent to 571 million dollars, with Telkomsel of Indonesia contributing the biggest amount of 252 million dollars, up 46 percent from last year.

SingTel owns substantial stakes in Telkomsel, Bharti and four other regional telecoms operators and the company's investments in these mobile associates are part of its strategy to reduce reliance on the small Singapore market.

In Singapore, where SingTel is the dominant telecom service provider, revenues surged 8.2 percent to 1.44 billion dollars from a year ago.

Optus increased its revenues by 7.4 percent to 2.22 billion Australian dollars (2.07 billion US)

#Singapore Telecom says Q2 profit up 10.1 percent
You May Also like: