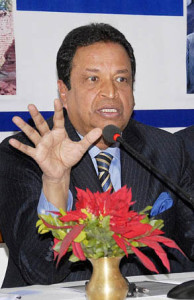 Social business guided by the principle of positive social change can transform the Nepali society, President of Chaudhary Group and Chairman of Chaudhary Foundation Binod K Chaudhary has said.

“The relevance of social business is very high in the context of Nepal. It can be immensely effective to bring economic and social changes in the country,” Chaudhary stated, speaking at a ceremony organised by the Chaudhary Foundation here today to celebrate the Seventh World Social Business Day.

Also speaking on the occasion, Deputy Country Director of United Nations Development Programme (UNDP) for Nepal Sophie Kemkhadze, Australian Ambassador to Nepal Glenn White, Secretary of Ministry of Industry Surya Prasad Silwal, and experts stressed on the importance of social business, as per a media release.

Ambassador White expressed his belief that social business could help realise Nepal its ambition to graduate into a developing country by 2022.

Chaudhary Foundation organised the event in celebration of Seventh World Social Business Day, amid other events aimed at generating awareness on social business. It also organised a week-long orientation workshop for 15 college students aged 16 to 20. The students presented their business plans at the end of the event.

The concept of social business was first presented by Nobel Peace Laureate Professor Muhammad Yunus of Bangladesh. Its objective is to start a small-scale business with a positive social impact. Personal profits are not expected in such business and there is no sharing of dividend. But profits earned are spent to expand the business further, or to start another similar venture.

In Nepal, Chaudhary Foundation has introduced the concept of social business in cooperation with the Yunus Centre.