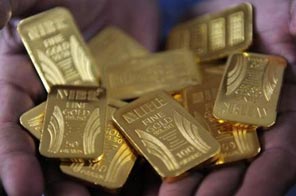 COLOMBO: Sri Lanka's central bank on Saturday said it has been buying gold to diversify its reserves amid volatile currency markets, days after India announced it had purchased 200 tonnes of the precious metal.
Central Bank assistant governor Nandalal Weerasinghe declined to confirm analysts' estimates that the tropical island nation had purchased around five tonnes of gold.
"We have been observing that prices of gold have been going up so we have been strategically buying gold over the past several months as part of a reserve management process of diversifying our portfolio," he told AFP.
The price of gold hit a record high above 1,100 dollars an ounce in London trading on Friday following a report that Sri Lanka had joined India in purchasing the precious metal.
Weerasinghe did not disclose from which sources the bank was buying the gold or at what prices. He gave no breakdown of how much of the country's more than five-billion-dollars in foreign reserves were held in gold.
A senior source close to the central bank said the gold purchases were part of moves to smooth periods of dollar volatility and the amount bought was in the neighbourhood of 5.3 tonnes as of September.
The source said the bank intended to "continue to buy it (gold) as a hedge against volatility in currency markets".
Last Monday, the IMF kicked off its sale of more than 400 tonnes of gold by announcing it had sold almost half to India, the world's biggest gold consumer, at near-record prices.
A senior Indian government official, who did not wish to be named, told AFP that India's purchase of gold had been aimed at "evening out the potential for volatility in the value of the reserves."
"This was a matter of timing. The IMF had said it was selling gold so we took advantage of that, he said.
"It should be seen more in the light of diversification of reserves -- it would be a mistake to read too much into this for the (outlook for the) dollar."
Gold and other commodity prices have surged in recent months amid a move away from a sliding dollar. The metal is also winning support over fears about a spike in inflation, as gold is widely regarded as a safe store of value.
"Central banks, which have been net sellers of gold are now a new and increasingly important source of demand," World Gold Council chief executive Aram Shishmanian said in a statement.
The Sri Lankan bank's gold purchase comments coincided with a separate bank announcement that the release of a second tranche of an IMF bailout had pushed its foreign reserves to a record high of over five billion dollars.
"The gross official international reserves of the country, which has already exceeded 4.8 billion dollars, will surpass five billion dollar mark with the receipt of the IMF 329.4 million dollars," the central bank statement said.
The IMF gave the bailout package to Sri Lanka in July after the nation's reserves slumped to just over one billion dollars as security forces pushed ahead with their final offensive to crush separatist Tamil Tiger rebels.
"With the renewed investor confidence and the continuation of the steady increase in foreign exchange inflows, the country's external reserve position is expected to strengthen further in the coming months," the bank said.

#Sri Lanka buying gold 'to diversify reserves'
You May Also like: