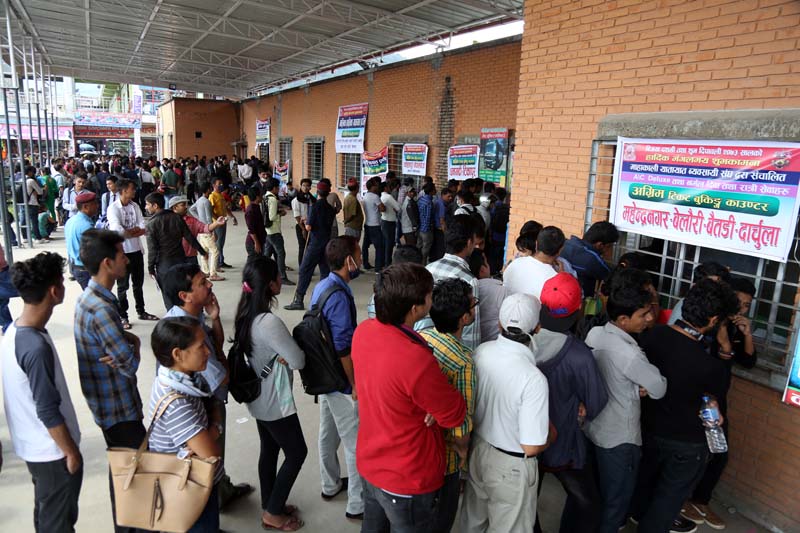 People stand in line while some crowd around, to buy tickets to go home for the upcoming Dashain festival, at the Naya Bus Park ticket counter, Gongabu, on Friday, September 23, 2016. Photo: RSS
Kathmandu, September 9 Transport entrepreneurs have finally relented to open pre-booking of bus tickets for Dashain from Tuesday through all the booking points across the country. After a meeting with Minister for Physical Infrastructure and Transport Bir Bahadur Balayar and other top government officials at the Department of Transport Management (DoTM) today, transport entrepreneurs and the government have agreed to open the pre-booking of bus tickets. According to Tok Raj Pandey, spokesperson for DoTM, bus tickets booking process will be opened for the long- and medium-route vehicles. The DoTM has sent its nine-point directive to the Federation of Nepalese National Transport Entrepreneurs (FNNTE) to manage the pre-booking of tickets for the festive season. As per the government’s directive, entrepreneurs should open the pre-booking of tickets and they have to clearly inform the passengers about the charge and distance of the route. Likewise, entrepreneurs are only allowed to carry the passengers as per the capacity of vehicles. Following discussions on the concerns raised by FNNTE, the government has assured them that the process to hike the transportation fare would be initiated after the festivals. “We have told them that the government will begin the process to adjust the transportation fare as per their demand,” Pandey informed. According to him, the government has also assured the representatives of FNNTE that it will take the initiative to begin the amendment process of Vehicle and Transport Management Rules to include a provision to instal top-carriage on passenger vehicles. “However, before the amendment to the rules, we cannot allow them to instal the top-carriage on passenger vehicles,” said Pandey. Earlier, transport entrepreneurs had been refusing to open the pre-booking of bus tickets demanding hike in transportation fare and that they be allowed to instal top-carriage on their vehicles.
#Department of Transport Management #Ministry of Physical Infrastructure and Transport #transport entrepreneurs #Dashain #Federation of Nepalese National Transport Entrepreneurs #DoTM #FNNTE #Pre-booking of bus tickets
You May Also like: