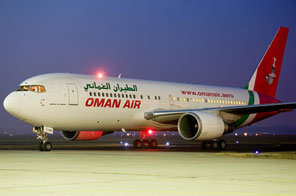 KATHMANDU: Oman Air and Spirit of Manila will soon make their launch as the two new international airlines in Nepal from March 2010. Within six months since last June, six international airlines entered the Nepali market, taking the number of international operators to 25.
“As there is a total of 25 airlines there will not be any problem of air accessibility,” said Ministry of Tourism and Civil Aviation (MoTCA) secretary Narendra Prasad Ghimire on the 11th anniversary celebrations of Civil Aviation Authority of Nepal (CAAN). Ghimire said the launch of two new international airlines — Oman Air and Spirit of Manila — would take place in March 2010. According to him, the current total seat capacity is 21.5 lakh which has reduced the air accessibility problem.
Despite the economic downturn all over the world, it is expected that air transport will regain momentum from 2010, said CAAn director general Keshab Raj Khanal.
Compared to first 10 months’ traffic throughout 2008, this year TIA showed 8.41 per cent, 9.63 per cent and 7.62 per cent increase in aircraft, passenger and cargo movement, respectively, for the same period. On the domestic front for the same period of comparison, aircraft movement grew by 19.72 per cent and passenger traffic by 35.15 per cent.
Talking about infrastructure development, Khanal said, “It is after 14 years that runway and taxiway overlay works at TIA are to begin. An additional parking bay is also being expanded which will lessen congestion at TIA. The project for the development of car parking has been initiated.”
Khanal added, “Compared to fiscal 2007-08, the fiscal 2008-09 saw an increase of 13 per cent in the total income of CAAN — Rs 2.18 billion.”
The recent negotiations with India has availed 30,000 seats to and from six metropolitan cities of India, a historic surge of 6000 air seats and from seven points in India both ways.

KATHMANDU: Nepal Association of Tour and Travel Agents during a programme on Thursday insisted on the addition of new aircraft. Representatives of different tour and travel companies said the new aircraft were urgently required on an emergency basis for ensuring the success of the coming Nepal Tourism Year 2011.

#Two new foreign airlines to begin service by March
You May Also like: