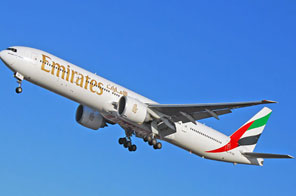 KATHMANDU: The United Arab Emirates (UAE) is planning to sign open sky agreement with at least 10 countries, including Nepal in 2010. The UAE has sent the agreement papers to Nepali authorities, the UAE’s local media reported today.
“We hope we will be able to conclude open sky agreements with at least 10 countries this year,’’ Saif Mohammed Al Suwaidi, director-general of GCCA said. Khaleej Times reported that the UAE is working hard to explore the possibility with a total of 25 countries.
The UAE has already signed open sky agreements with about 45 countries in the Mena region and with some in Europe, North America and Asia. Recently, it signed such a deal with Sri Lanka.
“We will be signing open sky agreements with Australia and Nepal in the first quarter of 2010. Talks are in progress with India and Pakistan also to work out an open sky agreement with them at the earliest,’’ Al Suwaidi said.
The GCCA official said that the UAE was in discussions with the European Union (EU) to have a horizontal agreement on open sky policies instead of talking to individual member countries of the union.”Maybe we will be able to conclude such a horizontal agreement covering all the members European Union by 2010 end or early 2011,’’ he added.
The UAE had earlier joined the European Union, the United States and five other countries to sign the ‘Statement of Policy Principles’ for adopting open sky policies through a multilateral framework instead of the current practice of countries entering into bilateral agreements.
Under the current bilateral framework, the airlines are not permittted market access to other countries until government negotiators conclude agreements to allow cross-border services. Also, at present national ownership requirements do not allow airlines to merge across borders.

#UAE keen on signing open sky agreement with Nepal
You May Also like: