US gets China's support on economic recovery 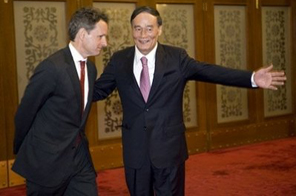 US Treasury Secretary Timothy Geithner (L) is shown the way by Chinese Vice Premier Wang Qishan (R) upon his arrival for a meeting at the Great Hall of the People in Beijing. Source: AFP

BEIJING: China took up US Treasury Secretary Timothy Geithner's call to work together in battling the financial crisis as the Asian giant tries to position itself as a major force on the global stage.

Beijing was eager to deepen efforts with Washington on dragging the world out of the economic slump, Vice Premier Wang Qishan told Geithner in a Monday meeting, the foreign ministry said.

But state media expressed opposition to the government's policy of buying massive US debt that they said could see the value of China's assets battered as the financial crisis continues.

Wang, who is in charge of China's economy, was quoted by the ministry as telling Geithner: "We will send a message that China and the United States are cooperating substantively to get over the difficult times.

The two sides further laid the groundwork for the first "strategic and economic dialogue" agreed to by Chinese President Hu Jintao and US President Barack Obama and to be held in Washington later this year.

"The major task of the dialogue is to address the global economic slowdown," Wang said.

Geithner is scheduled to meet Hu and Prime Minister Wen Jiabao later Tuesday, the last day of his two-day visit.

"The world is going through an exceptionally challenging period now and I think the world has a huge stake in our two countries working closely together to lay a foundation for recovery," Geithner told Wang.

China has recently been trying to move out of the shadows of global politics and place itself at the head table of world powers and its purchase of almost 800 billion dollars in US assets gives it a strong hand.

And Geithner's visit is seen as being largely aimed at assuring Chinese leaders that their money is safe despite a ballooning US budget deficit.

As the largest holder of US Treasury bills, which are crucial to funding Washington's multi-trillion dollar recovery plans, China has expressed concerns that its investment is at risk.

"Ordinary Chinese people are discontent with the declining value of China's huge foreign exchange reserves denominated in US dollars," the paper said.

"It will be regrettable if he (Geithner) underestimates and shuts his ears to voices from China's civil society," it said in an editorial.

Geithner named David Dollar, the World Bank's country director for China, to replace Loevinger as the Treasury's emissary to the nation.

#US gets China's support on economic recovery
You May Also like: