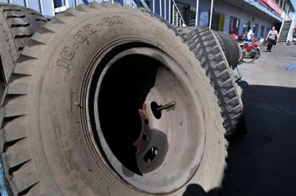 A woman walks by a rack of tyres at a bus depot in Beijing Source: AFP

BEIJING: US tariffs on tyre imports from China are a "grave" form of trade protectionism and undermine the two countries' economic ties, China's foreign ministry said on Sunday, quoted by state media.
"The United States, by making the decision, failed to honour its commitments made at the G20 financial summit and abused trade remedy measures, which is grave protectionism and will undermine China-US economic and trade ties as well as the early recovery of the world economy," foreign ministry spokeswoman Jiang Yu said, quoted by Xinhua news agency.
"We hereby express our strong discontent and firm opposition to the US decision," the spokeswoman said.
The comments came as China announced it was examining possible unfair trade practices involving imports of US car products and chicken meat, firing back after Washington's own announcement of tariffs on Chinese-made tyres.
The dispute comes as US President Barack Obama is due to host his Chinese counterpart Hu Jintao at the G20 summit later this month.

#US tariffs undermine economic #trade ties: Beijing
You May Also like: