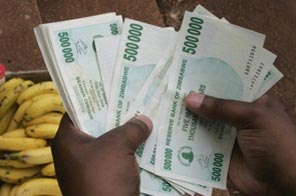 A Zimbabwean man counts a big stack of Zimbabwean dollars to buy some bananas in Harare in 2008. Source: AFP

HARARE: Zimbabwe's central bank governor said the country will not put the local dollar back into circulation anytime soon as the economy must first achieve growth rates of at least seven percent, a state daily reported on Saturday.
"For the avoidance of doubt and market uncertainty, it is hereby clarified that the re-introduction of the Zimbabwe dollar will only be contemplated when certain fundamentals have been achieved," the central bank governor, Gideon Gono, was quoted as saying by The Herald.
Gono said Zimbabwe will continue using the US dollar and other hard currencies introduced at the beginning of the year until the economy has reached annual growth rates of at "least seven percent" with foreign currency reserves of at least US 1.5 billion dollars.
"It is therefore imperative that the market players and stakeholders in all the sectors of the economy optimise their trading and productive systems to be in line with the current multiple system, as the country will be under the system for the foreseeable future," Gono said.
President Robert Mugabe and Gono earlier this year had said the Zimbabwe dollar might return into circulation. Mugabe said ordinary people who are stuck in poverty were unable to access the US dollar in a country where unemployment levels were over 90 percent.
But Finance Minister Tendai Biti said the country will only return to the local unit once the economy has stabilised and there is production in all the sectors of the economy.
Gono, who the opposition Movement for Democratic Change (MDC) led by Prime Minister Morgan Tsvangirai want removed at the helm of the central bank, is one of the outstanding issues that has stalled the unity government of the MDC and Mugabe's ZANU-PF.
The MDC says Gono was unilaterally appointed by Mugabe before the formation of the inclusive government and the party blames him for the country's economic collapse over the years by printing money and causing hyper-inflation.
Zimbabwe's battered economy stabilised when rivals Mugabe and Tsvangirai formed the unity government in February.
Biti this year projected that Zimbabwe's economy will grow by an average of 3.7 percent.

#Zimbabwe dollar will not return soon: bank chief
You May Also like: