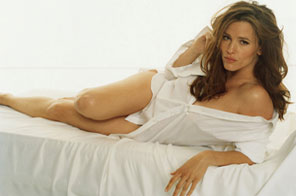 LONDON: Ben Affleck wooed his wife Jennifer Garner over the internet, with a series of seductive emails.
The pair married in 2005, following Garner's split from ex-husband Scott Foley.
In a new interview with Parade magazine, the actress reveals Affleck pursued her online. She says, "He's a very good writer."
When asked if he wrote her love letters, she replies, "Don't make assumptions. I didn't say that! Okay... e-mail. He's a very persuasive writer."
And she's still smitten, five years into their marriage: "Ben is sexy and kind, but he's also a riot. We can be very goofy together. He doesn't have trouble wiggling his way in anywhere. Ben is charm personified when he wants to be. He's not easily threatened or made uncomfortable - he's very secure in that way.
"Maybe he just knows I'm nuts about him, and he doesn't have anything to worry about."