Bullock getting naked with a "Rock Hard" 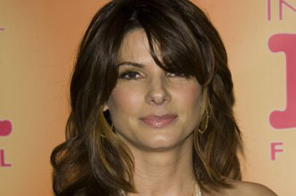 LOS ANGELES: Sandra Bullock is one lucky lady. In The Proposal, her new romantic comedy in which she plays a wretched book publisher who blackmails her assistant into marrying her, Bullock got to be very naked with Ryan Reynolds.

Read on to find out what Ms. Bullock told me about her boobs and butt, her hubby of four years, Jesse James, and what it felt like going skin-to-skin with Mr. Reynolds.

I have to tell you, I loved The Proposal—and I'm not just saying that because I'm talking to you.

You can lie to me. It's OK to lie my face, as long as it's positive. [Laughs]

Now, I know obviously a big deal is being made out of the nude scene you have with Ryan…

That scene will go down as a classic.

In the "anals" of history.

You're really keeping abreast of these things here, aren't you?

Oh, that's great! You're taking the bull by the horns.

The expression on your face as you're sliding down Ryan's body was so perfect. How did you do that?

I give all hats off to [director] Anne Fletcher, because she's brilliant. It became very technical. It was like a dance. It was like we were doing "All That Jazz." [Laughs] But if you use what's on your body as a joke—my nakedness—and then you have another body that's rock hard…

No! Ryan is rock hard, but no no no no, nothing was hard. I'm sure it gets hard, but not that time, and it was all fine. I mean, I wouldn't know if he had anything down there because I never looked! Anyway, when my soft face, hit his rock-hard abs, there's going to be a cause and effect.

Was there ever a time when you were like, maybe I should be wearing a towel in this scene? You're really naked!

I had a washcloth, a hairdryer and a dog—and some little bits of my hair to cover some niplage. That's all I was given. It's like making soup. If we're given these ingredients, let's make the best soup we can!

How do you keep that body in shape? When I told a friend I was talking to you, he said, "Ask her how she gets that ass!"

Well, I wasn't blessed in the upstairs department. Baby was given some back at birth. Didn't know what to do with it at first, but it's just what I got. The purpose is to maintain it and keep it where it is. I was an athlete all my life. I have an athlete's body. I don't have a model's body. We also get paid to go to the gym. But you know, I get lazy just like everyone else. I'm not a fanatic. I love to feel good, but I'll put on weight. But if you're getting paid to be naked, you do put the incline on six and stay on there a little bit longer because it's like, If my ass is going to be on camera, let's make sure it's in the right place when they start rolling film.

OK, I have to tell you something. There is a Proposal poster on my corner and, I swear, I saw a homeless man pleasuring himself to it this morning.

You know who I credit for that? Our costume designer. Because she made the booty look nice, cinched the waist nice, nice broad shoulders, so I think he was pleasuring himself to my wardrobe. But how do you know he wasn't a homosexual? Maybe he saw Ryan in Wolverine and went "Oh my god! There's that guy with the 12-pack! Here I go!" And then he went at it! I think it was Ryan.

Now talk to me about Betty White: How did you keep a straight face during your dance scene?

It became again one of those technical nightmares where we were fighting rain. But Betty White has some game and some rhythm. She needs to be in some serious ghetto videos. Jay-Z needs to take her on tour. Get her a nice grill, you know, B.W. in diamonds on the gold grill on the front teeth. Betty White has more stamina and more commitment than all of us actors put together.

In another scene, Betty grabs your boobs while she's altering your wedding dress and makes a crack about your lack of boobage.

Betty is the most delicate and sensitive second-base lover I've ever had in my life. She really knew how to address a smaller-breasted woman—teacup size, you know. Look, I've got great boobs. I love my boobs. They're just not a triple D. I know what to do with them. I wouldn't know what to do with a triple D. They would have a mind of their own. I might be in a different kind of line of business.

Whose idea was it for Ryan to tell Betty to "go suck a hot cock" in the Funny or Die video?

All of that was scripted. It was even darker than that! And we just went, "Oh, that doesn't feel good!" There was some ad-libbing. I wanted to say to Ryan, "No one knows who you are," because it's just the meanest thing that can come out of person's mouth, and I felt so bad! But to say something mean to Betty White, like "suck a hot cock"—I didn't say it; I'm just quoting Ryan—well, we all felt terrible. And now people think that it's real. I've heard about some blogging going on, just ripping me a new one. I'm like, "Oh my god, people, its fake!" I think that's where we've done our job a little too well.

So what's next for you?

I'm finishing press for this and then finishing a film called The Blind Side. I play a smaller role in a really incredible story. It's one of the most beautiful, heartfelt, unusual stories. And then I'm going to follow my husband on his tour all summer.

He's completely hot by the way.

You know what, he's one of the best men that I have ever met. He's a good man.

You're actually one of the first celebrities I ever interviewed, back in 1996 for A Time to Kill. You told me you gave fortune cookies to your family for Christmas with their gifts written on the fortunes.

I have the car that I gave my mom and dad in that fortune cookie in my driveway in Austin. My dad was going to get a new car, and I was like, "You are not selling the first thing I ever bought, and that was mom's baby!" It literally runs as well as it did then. So now it's my car in Austin. How great is that?

#Bullock getting naked with a "Rock Hard"
You May Also like: