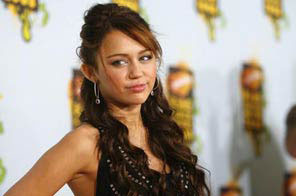 LOS ANGELES: Miley Cyrus has paid tribute to the tourbus driver who lost his life in a tragic road accident in the early hours of Friday (19Nov09).
Bill Douglas died when the vehicle he was driving flipped over on a highway in Virginia, killing the 53 year old and injuring nine of 14 production crewmembers on board.
The bus was one of four coaches transporting Cyrus' tour crew to Greensboro, North Carolina, where she is due to perform on Sunday (22Nov09). The singer was not travelling with her crew - instead, she had boarded a flight to her native Nashville, Tennessee.
The Hannah Montana star has expressed her grief at the death of "Uncle Bill", who she considered part of her "family".
In a statement posted on Cyrus' website, she says, "We are deeply saddened by the loss of Bill 'Uncle Bill' Douglas.
"Members of our tour are like members of our family. Our thoughts and prayers go out to his family in the midst of this tragedy. He will truly be missed."
Cyrus' concert in Greensboro will go ahead as planned.

#Cyrus 'deeply saddened' by tourbus tragedy
You May Also like: