An evening of classical delight 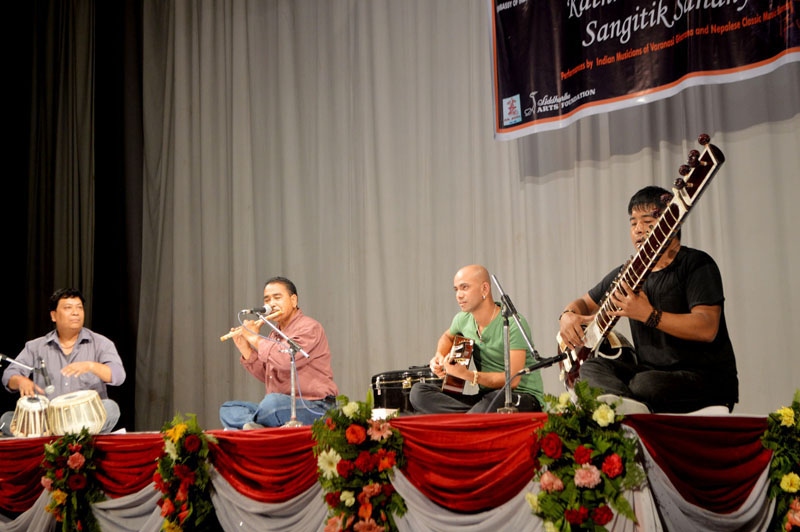 Indian and Nepali classical singers and musicians perform at a programme ‘Kathmandu-Varanasi Sangitik Sandhya’ at the auditorium of Army Officers’ Club, Bhadrakali, kathmandu, on July 30, 2016. Photo courtesy: Embassy of India
KATHMANDU: The auditorium of Army Officers’ Club, Bhadrakali was packed with the audience and the occasion was ‘Kathmandu-Varanasi Sangitik Sandhya’ on July 30. The audience enjoyed live musical performances by Indian musicians of Varanasi Gharana, Nepali classical singers and musicians. Classical instrumental ensemble Sur Sudha, who are active in Nepali musical scenario since 1989, put forth powerful performance. Surendra Shrestha on tabala, Prem Rana ‘Autari’ on flute, Bikash Sunar on guitar and Rajeev Shrestha on sitar not only played classical beats, they also performed popular Nepali songs like Kanchhi Lai Ghumaune Kathmandu Sahar, and Resham Firiri. They also played Suna Suna Hai Maichyang — starting the song in normal tempo, they played it in faster beat, thrilling the audience. And the audience seemed to enjoy the performance, as they kept on applauding till the end of the song. Nepal’s classical singer Pandit Bishnu Acharya performed dhrupad. It was followed by the performance of Indian musicians Dr Shrabani Biswa (on sitar) and Dr Ram Shanker (on tabala). They performed Raga Charukeshi. The duo produced a happy tune, giving a feel of celebration. About their performance, Dr Biswas shared, “I am glad to be here and performing. My heart has a special feeling for Nepal and it is an honour to be here.” Another enthusiastic performance was by 73 year-old sarod player Mohan Sundar Shrestha. He was accompanied by Rabindra Lal Shrestha on tabala and sitar, and it marked the end of the musical show. The artistes presented a total of six performances. Chief of Army Staff Rajendra Chhetri and Indian Ambassador Ranjit Rae honoured all the artistes at the event. Mukesh Shrestha was one of the members of the audience present at the venue. After watching the show, he shared, “There is a certain charm in eastern classical music and I enjoyed the show very much. The classical music has the ability to penetrate deep into my mind that brings peace in me.” The concert was more than entertainment for Surendra. “Along with entertaining the audience, the event is also a part of cultural exchange to strengthen the relation between Benaras and Kathmandu,” he said.
#Army Officer’s Club #Bhadrakali #classical music #Kathmandu-Varanasi Sangitik Sandhya #Indian musicians #Varanasi Gharana #Nepali classical singers
You May Also like: