Hugh Laurie gets star on Hollywood Walk of Fame 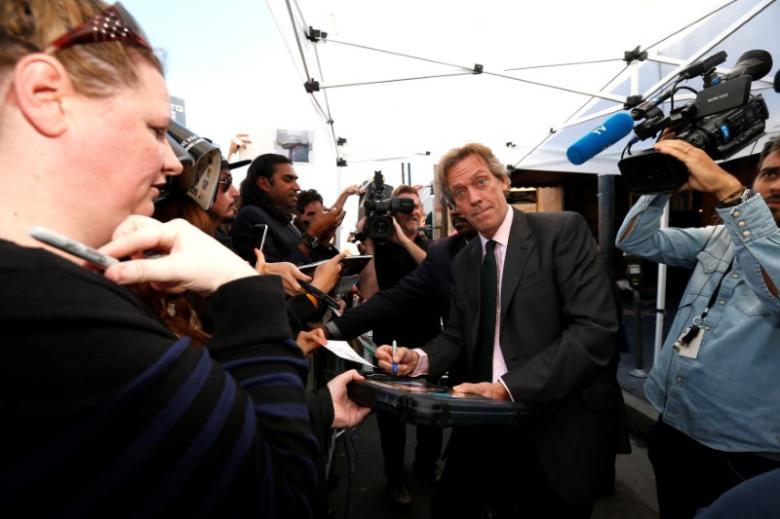 Actor Hugh Laurie signs autographs after unveiling his star on the Hollywood Walk of Fame in Los Angeles, California US, October 25, 2016. REUTERS
LOS ANGELES: British actor Hugh Laurie, best known for playing a cantankerous doctor in the TV series 'House', received a star on the Hollywood Walk of Fame on Tuesday. Laurie, 57, was already well-known in Britain in the late 1980s for his role in the comedy series 'Blackadder', and 'A Bit of Fry and Laurie' with his friend and former comedy partner Stephen Fry. He crossed the Atlantic in 2004 to play Gregory House in the eight-year Fox TV series, twice winning the Golden Globe award for best actor in a TV drama. "I have lost count of the number of times, the number of young people I've met who are either studying or practising medicine because they saw 'House'," Laurie said at the ceremony in Los Angeles. "There are physicians today saving lives, delivering babies and lancing boils because their imagination was ignited by stories and ideas and possibilities that they might not otherwise have considered," he said. Laurie currently stars in Hulu's thriller TV series 'Chance', playing a forensic neuropsychiatrist. Fry, who met Laurie while studying at the University of Cambridge in England, poked fun at his friend during the ceremony. "It is the tradition in this marvelous town to reward stars by bringing them down to earth, so far down to earth that now Hugh will spend eternity having chewing gum and dog poo trodden into him and very likely worse," Fry told the crowd. "The world was at its feet and now the world's feet are at him," he added. The Hollywood Walk of Fame said on its website that Laurie received the 2,593rd star on the renowned Hollywood Boulevard.
#Hollywood #britain #Hollywood Walk of Fame #Hugh Laurie
You May Also like: