Justin Bieber shows vulnerable side as comeback gets under way 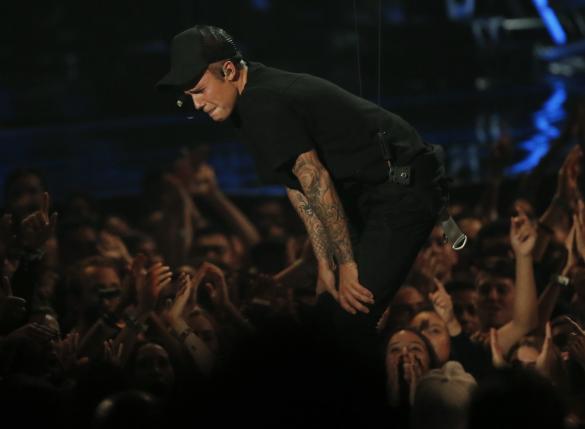 Justin Bieber reacts as he finishes performing a medley of songs at the 2015 MTV Video Music Awards in Los Angeles, California August 30, 2015. REUTERS
NEW YORK: Oh Baby! Justin Bieber's comeback is getting off to an emotional start with the Canadian pop sensation showcasing his sensitive side as he seeks to put his bad boy past behind him. The approach appears to be working. His new single "What Do You Mean?" on Thursday notched up more than 21 million streams on Spotify globally in just five days, setting a new record for the music app. Bieber, now 21, broke down in tears at Sunday's MTV Video Music Awards show after singing the song. The sobs, he told Jimmy Fallon on "The Tonight Show," were authentic. "Honestly, I just wasn't expecting them to support me in the way they did. Last time I was at an award show I was booed," Bieber told Fallon on Wednesday. Bieber is back on the promotional trail before the November release of his first album of new material in three years, most of which were marked by bad behaviour off stage and a string of court cases that risked damaging his image as a family-friendly teen heartthrob. Bieber found fame as a 13-year-old and went on to become a global pop phenomenon with hits like "Baby" and "Believe." He said in January that he wanted to shed the "arrogant" and "conceited" attitude that led to arrests for careless driving, pelting a neighbour's home with eggs, assaulting a photographer, and abandoning a pet monkey at a German airport. "I just had a bunch of knuckleheads around me," he told Fallon of his wild child period. "That was pretty much it. You have to figure out what you are OK with, and what you're not OK with, but you have to test the waters. I just happen to be in front of a spotlight and they caught all those moments." In the first of a week long promotion on NBC's "Today" show on Thursday, Bieber's work with the Make a Wish Foundation was highlighted in interviews with two young female fans who got to meet him when they were seriously ill. He will perform a free "Today" show concert in New York City on Sept. 10. The 21 million streams for "What Do You Mean?" broke Spotify's record for the biggest first week streams for a single. The previous record holder was One Direction's "Drag Me Down," Spotify said.
#Justin Bieber #Canada
You May Also like: