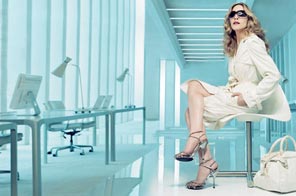 LONDON: Pop star Madonna has been confirmed as the new face of high-end fashion brand Dolce & Gabbana.
Stefano Gabbana, one of the Italian designer duo, is thrilled that the singer has taken part in a campaign for the fashion house, reports femalefirst.co.uk.
'The campaign with Madonna is beautiful. I can't say anything about it. We are at the last shot... Madonna is simply beautiful... We're very, very tired but very happy as well... To have Madonna in our campaign is a dream come true,' Gabbana posted on micro-blogging website Twitter.
The 51-year-old star will appear in the label's spring 2010 campaign, advertising their womenswear collection. The advertisement will be Sicilian-themed and was shot in Brooklyn, New York, by fashion photographer Stephen Klein.
Earlier, Madonna has campaigned for Louis Vuitton, while her boyfriend Jesus Luz also campaigned for Dolce & Gabbana.

#Madonna new face of Dolce & Gabbana
You May Also like: