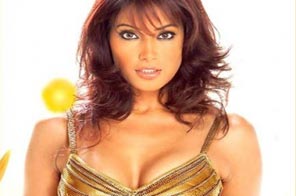 MUMBAI: Bipasha Basu, who now looks forward to multi-starrer comedy "All The Best", has dismissed rumours that her role in Mani Ratnam's "Raavan" was cancelled because her character posed a threat to the other actresses - Aishwarya Rai and Priyamani.

She insists it was an amicable decision between her and the director. Rumour mills were abuzz that Bipasha's role of Mandodari opposite Abhishek Bachchan in the film was suspended because her part was overpowering as compared to the other female stars.

"They were all rumours and only rumours. I am not a part of 'Raavan'. I was initially a part of 'Raavan' but Mani sir thought he couldn't do justice to my role... as to whatever he had promised me would definitely be in conflict with the actual story of the film once it is shot," Bipasha told IANS in an interview.

"So he took a call instead of being in an embarrassing position later on. He decided to tell me that and amicably we decided that it should not be done...hopefully we'll work together soon. So now there's going to be no Mandodari in the film," she added.

Bipasha was in the capital to promote her forthcoming release "All The Best - Fun Begins" that is releasing Friday.

Distributed by Yash Raj Films, the laughathon has been directed by Rohit Shetty. Apart from Bipasha, it also stars Fardeen Khan, Mugdha Godse, Sanjay Dutt and Ajay Devgn, who has produced the comedy.

" 'All The Best' is a situational comedy and a total entertainer. It deals with a lot of mistaken identities, people lying and getting into trouble," Bipasha said.

"My character is called Jahnvi who is married to Ajay in the film. She is a straightforward girl who is trying to run her life and family by looking after a totally rundown gym. She cons people to join the gym by lying because by the looks of it, nobody wants to join it," she added.

Apparently this is the 30-year-old's sixth movie with Ajay after "Zameen", "Apaharan", "Shikhar" and "Omkara".

"We also did a film together with Sanjay Dutt that was completed 50 percent, "Mr.Fraud" (shelved)," she said.

#Not doing 'Raavan' an amicable decision: Bipasha
You May Also like: