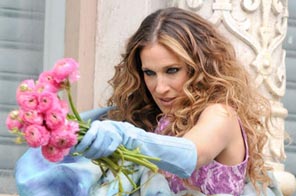 LONDON: Sarah Jessica Parker has security worthy of a US President on the set of her new movie.
The 44-year-old actress began shooting 'Sex and the City 2' in New York earlier this week, and has been hounded by over-enthusiastic fans keen to get a glimpse of their idol.
A source said: "The film's security team looked more like they were protecting the president than Sarah Jessica Parker.
"At one point, teenage girls were practically trampling each other trying to get to Sarah Jessica as she was walking back to her trailer, but her security team was shoving everyone out of the way."
Sarah - who plays fashionista Carrie Bradshaw in the film sequel - begged her bodyguards to be gentle with onlookers.
A source said told the New York Daily News newspaper: "She was telling them not to hurt the fans. She looked upset and extremely concerned. The guards were getting pretty rough."
Cynthia Nixon - who portrays lawyer Miranda Hobbes - has also been approached by overzealous hopefuls, and was even made to redirect her trailer to avoid some.
The source explained: "People were screaming and trying to push past guards. The fans were just too much. Security looked legitimately concerned for her safety."
The film's plot is a closely guarded secret, although there have been rumours it could see Carrie and her husband Big move to London, or Big have an affair.