Rustom: Not so shocking 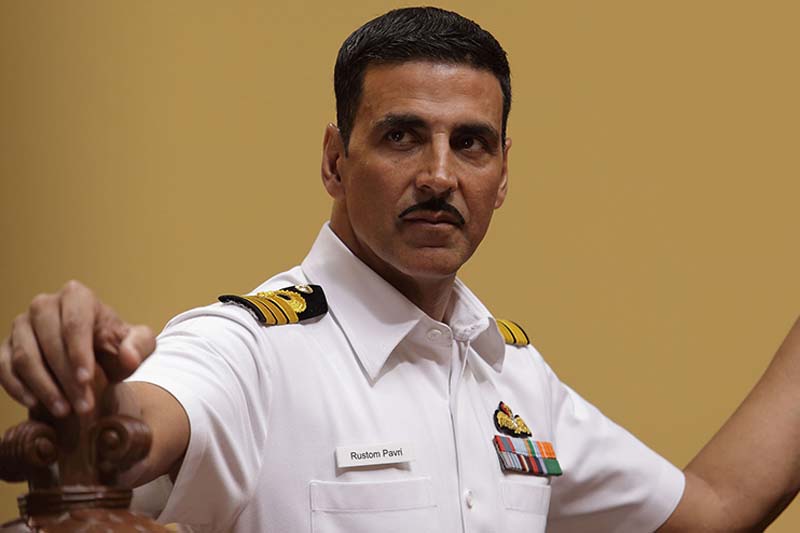 Photo: movietalkies.com
Kathmandu Indian Navy Commander Rustom Pavri (Akshay Kumar) returns home from a mission earlier than planned. Back home, he learns about the extra-marital affair of his wife Cynthia (Ileana D’Cruz) with their friend Vikram Makhija (Arjan Bajwa). Rustom, who loves his wife passionately, goes to Vikram’s home and shoots him thrice, killing him. The film’s tagline is after these shots — ‘3 shots that shocked the nation’.  The decorated Naval officer then surrenders himself before the police and the court trial begins — centred on whether Rustom is really guilty or is it just an act of self-defence — amidst immense public support and media interest. In this nearly two-and-half-hour long movie, Rustom brings to life India’s famous KM Nanawati case of 1959 where the Indian Navy commander was tried for the murder of his wife’s lover. The film tries to tell an interesting story, mostly through the courtroom scenes, yet it is not an entirely engaging watch. Rustom takes you back to the Bombay of late 1950s, and director Tinu Suresh Desai recreates the era with the use of reddish-brown tone, vintage cars and set-up of the police station and the courtroom. The director also deserves applauds for maintaining the film’s thrill — as it is a film with no mystery, and slightly predictable since it is said to be based on a real incident! But it is not entirely a thrilling watch — the slow-paced first-half is tedious, and flashbacks are not much of a help. The second-half in the courtroom is engrossing, but yet not gripping enough to keep you on the edge of your seat. However, you won’t want to miss any scene with Akshay there — he does impress as the naval officer with a thin moustache and in the white uniform. With his understated performance, Akshay nails his character — of the honest naval commander who loves his wife passionately, especially in the courtroom scenes. And he indeed impresses with his intense performance when his character gets a patriotic twist, though the sub-plot feels like a cliché. The treatment of certain incidents is amateurish — jury discussing the final decision and a few other incidents in the courtroom are not presented realistically, rather they provide a comic relief in between those dull scenes. D’Cruz is okay as Rustom’s wife Cynthia. Esha Gupta as Priti, Vikram’s sister, cannot leave an impact, it is her red lipstick that draws more attention. Bajwa seems okay as a casanova. But a few other supporting cast — Pawan Malhotra as investigating officer Vincent Lobo, Anang Desai as the judge, Kumud Mishra as tabloid editor Erach Billimoria, and Sachin Khedekar as the prosecution lawyer — entertain the audience in their respective characters. No songs are memorable except for Tere Sang Yaara, but the background score goes well with film’s storyline. Recommended as a one-time watch as the romantic thriller doesn’t shock you much.
#Akshay Kumar #Rustom Pavri #Ileana D’Cruz #Cynthia #Vikram Makhija #Arjan Bajwa
You May Also like: