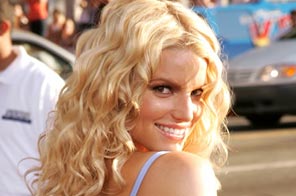 NEVADA: Hollywood diva Jessica Simpson has confirmed on Twitter her impending visit to India.
On Twitter Simpson wrote: "@kenpaves and I are going to India"
Ken Paves is a celebrity hairstylist out of Beverly Hills (USA). She will reportedly shoot in India starting next week for her VH1 docu-series show "The Price of Beauty".
In this show, Simpson will reportedly get some beauty pointers from Bollywood actress-model Neha Dhupia (Singh is Kinng), 29, who was quoted as saying: "I know for sure that Jessica will be draped in a saree."
Simpson reportedly may also study the local dietary fads, beauty regimes and fashions and even take part in some of the extreme practices she finds out.
Simpson will be throwing a grand Bollywood party after completing this shooting, reports indicate.
Hindu statesman Rajan Zed has urged Simpson to spend some time in an ashram (hermitage) while in India and explore Hinduism for solace, reinventing her, and to bring meaning to her life. Ashram stay might help bring Simpson tranquility, spirituality and serenity, Zed, who is president of Universal Society of Hinduism, added in a statement in Nevada (USA) today.
Zed says that ashram is a place of retreat usually used for spiritual development and India is full of them. Even Lord Krishna himself went to sage Sandipani's ashram to gain knowledge.