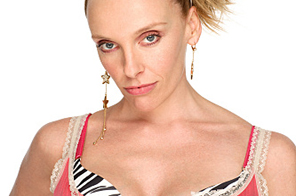 LOS ANGELES: Toni Collette's latest movie 'Foster' has begun filming in London.
Toni Collette has begun filming new movie 'Foster'.
The Australian actress stars alongside Ioan Gruffudd in the drama, which tells the tale of a married couple who have trouble adopting a new child following the death of their son.
Richard E. Grant, Hayley Mills and Anne Reid also star in the movie, which started shooting in London earlier this week, movie website Deadline.com reports.
Jonathan Newman directed an original short version of the film in 2005, and producer Peter Farrelly was so impressed he telephoned Newman to begin working on a feature-length version.
Farrelly and Deepak Nayar will co-produce 'Foster'.
Toni, who currently stars as the titular character in comedy series 'United States of Tara', recently admitted she was glad to have had a career based on talent over looks.
She said: "My career has never been based on how I look, and I don't want it to be. I like my work, like my life, to be much deeper than that - that's something I've managed to escape. I think it's a dangerous pressure.
"I would rather play somebody complex and rich and real than some feckless handbag."

#Toni Collette starts foster filming
You May Also like: